Once upon a time a field trip in Ieranto!

On Sunday morning, a group of Marine Biology students from the Sant’Anna Institute left Sorrento and began the long journey to Ieranto Bay for their first field trip. We have the chance to have three of them, Eve, Ariana and David, who are doing an internship of 5 weeks with the park, and here it’is their report of this day! 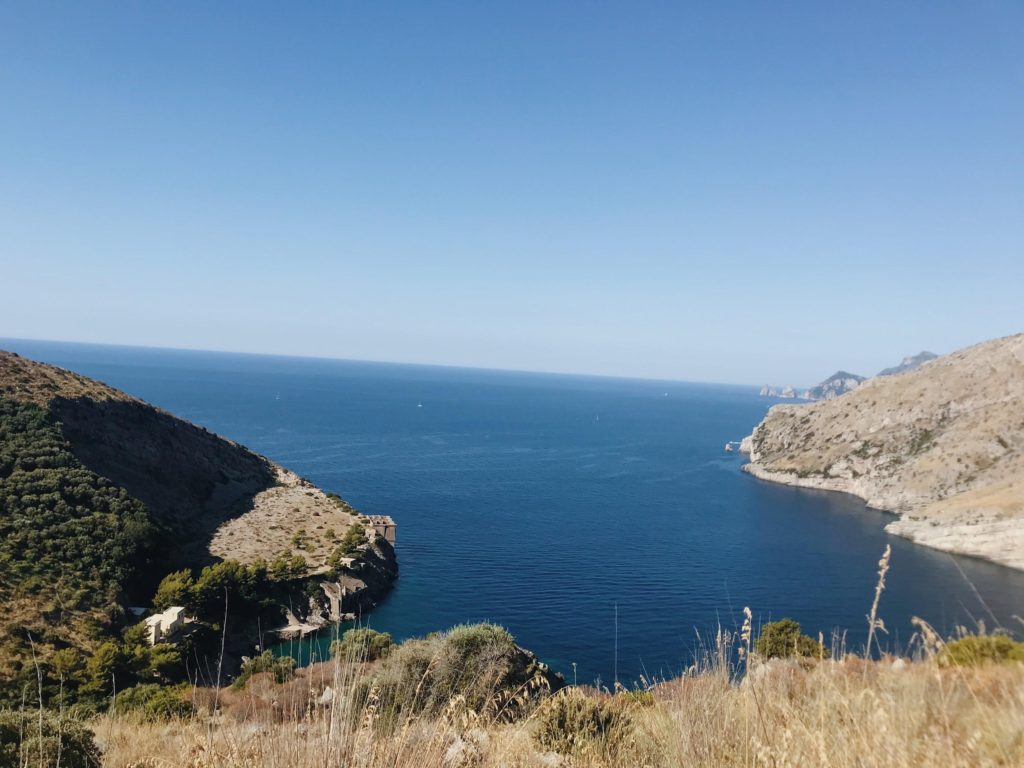 After catching the bus at 7:50, we arrived in the small village of Nerano and began our 40 minute hike down the mountain to reach the bay, in the Marine Protected Area of Punta Campanella. 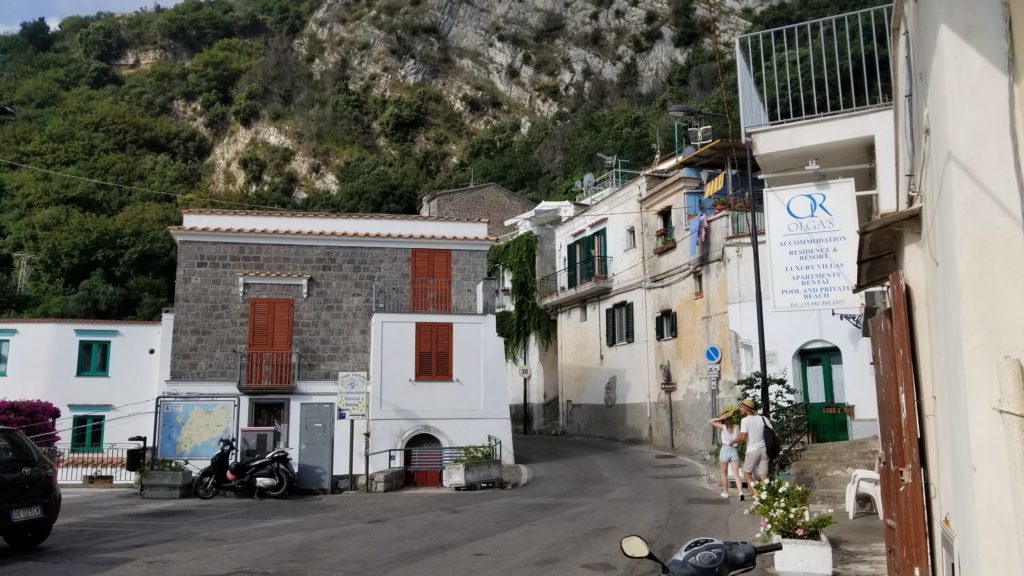 At the end of the hike, our day in Ieranto began with a quick jump in the beautiful waters of the bay before starting a short lesson about Posidonia oceanica, a type of marine grass that is found throughout the Mediterranean Sea at a depth of 0-45 m. 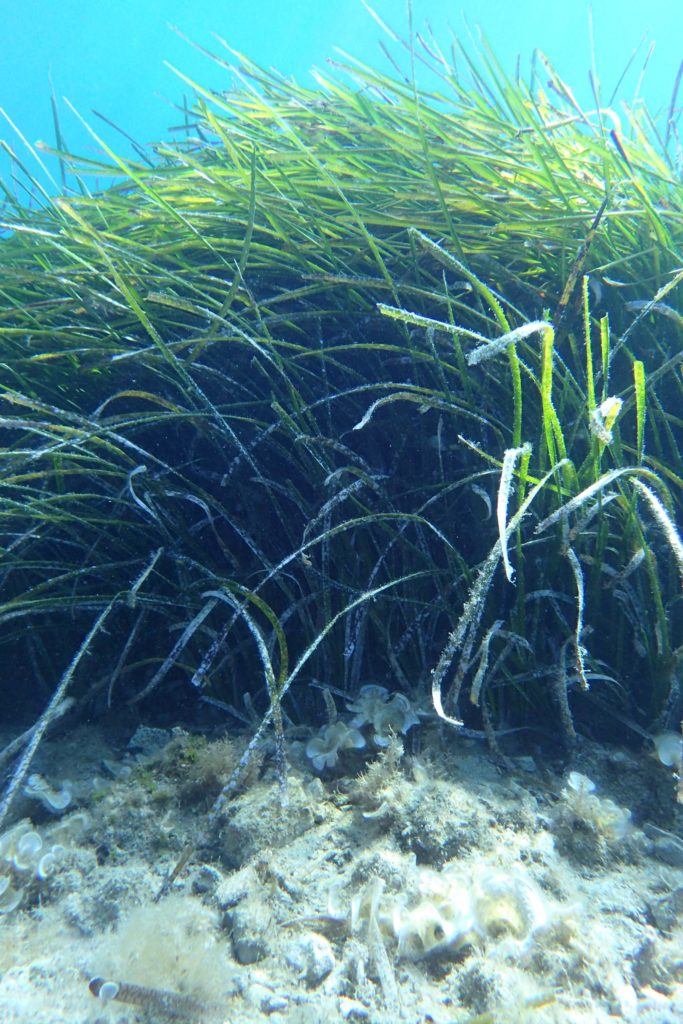 The posidonia is a vital part of this ecosystem because it is a biomass producer that serves as food for grazers and detritivores, reduces wave strength and stops the erosion of sediment, and forms banquettes (a nutritional source and habitat) on beaches.

The posidonia is also home to many organisms, such as Mugil cephalus, Sarpa salpa, and Diplodus vulgaris. It is for this reason that Ieranto Bay is a Zone B protected area, which only allows non-motorized boats and authorized motor boats to come in the bay. Even when the authorized motor boats enter the bay they must dock to the buoys, instead of anchoring, to protect the sea floor.

After our lesson, the group split into two groups and began to explore the bay. The first group went on a kayak tour lead by the volunteers at Project MARE, while the other group snorkeled through caves and along the cliffside with our professor, Domenico (who also leads the Project MARE team). 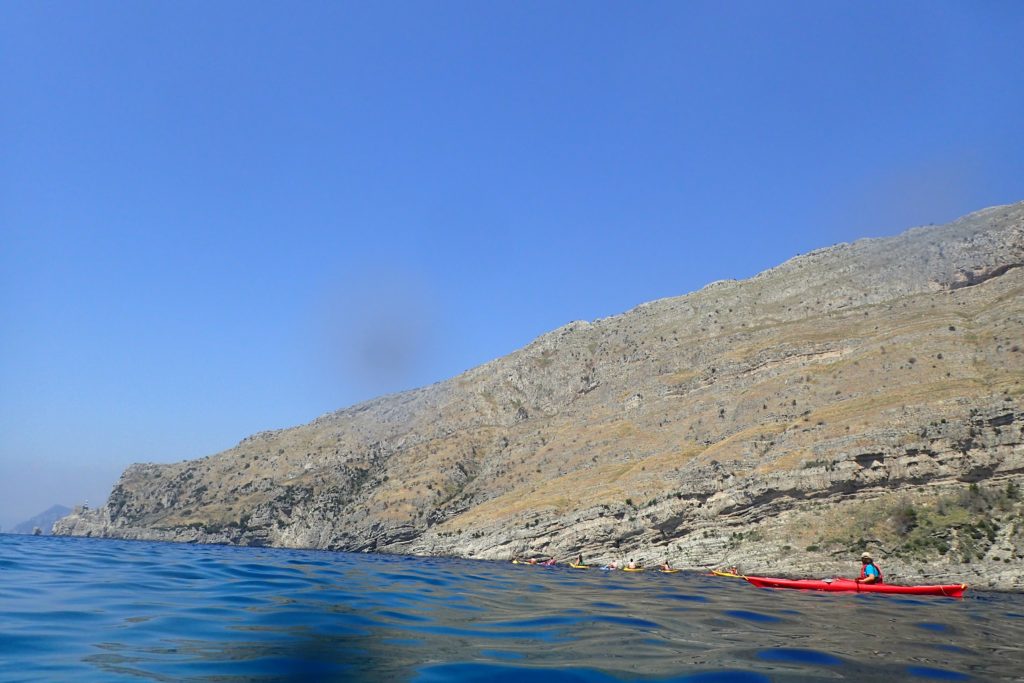 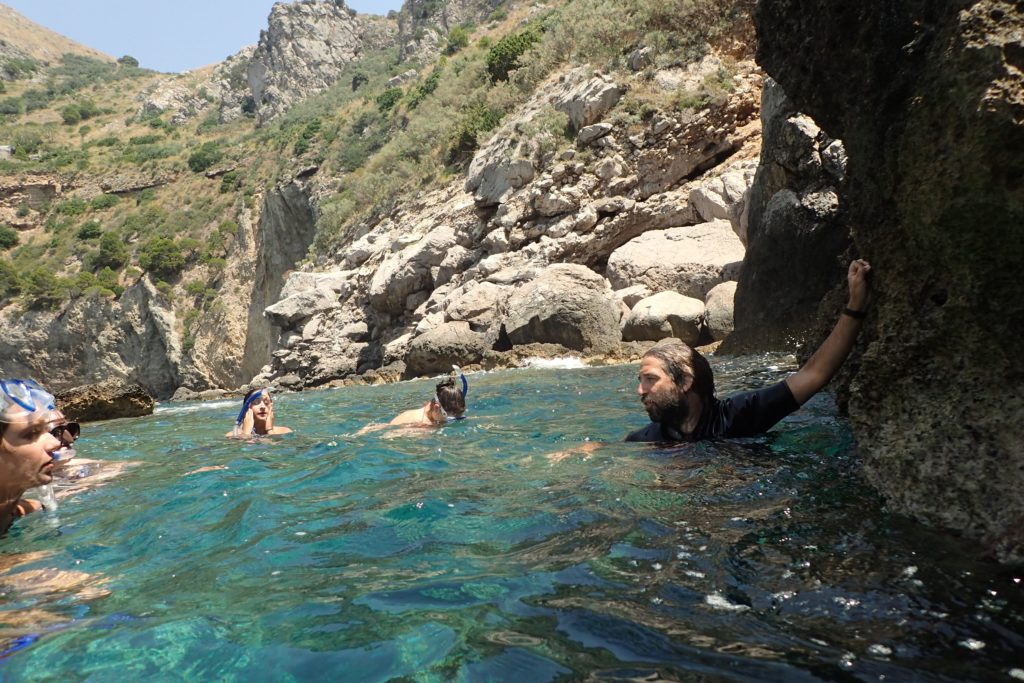 On the kayaking tour of the bay we paddled out to the tip of the bay to see the the Punta Campanella cave. While snorkeling, we identified species like sea cucumbers, starfish, sea urchins, algae, and so much more! After both groups had a chance to go kayaking and snorkeling we took lunch break so everyone could rest. 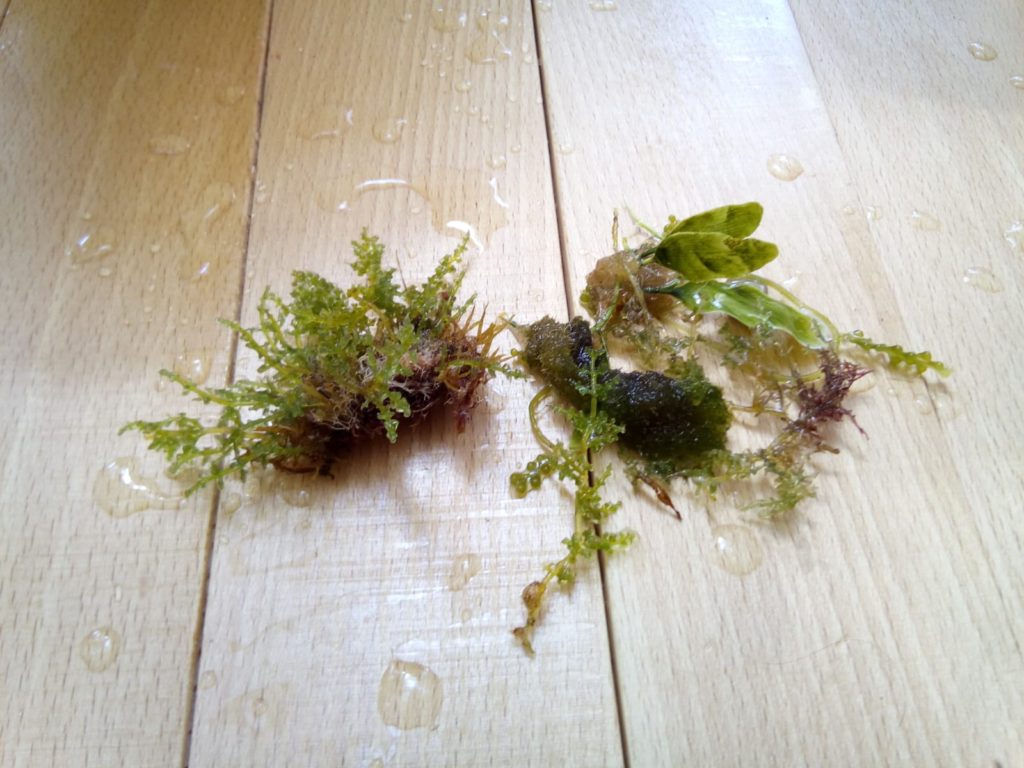 Following lunch, we had another lesson to learn more about all the different species of sea algae we found on our dive. Algae is a polyphyletic group of organisms that use photosynthesis to create energy. Algae can have unicellular, colonial, filamentous, or multicellular bodies that have no vascular tissues, roots, stems, or leaves. They can be divided into either macroalgae or microalgae (phytoplankton). Macroalgae can be green, red, or brown seaweed. This brought us into our next activity, identifying and sorting all the algae we found in the water.

While working on the algae identification, other groups began measuring Posidonia leaves to determine how much they were photosynthesizing in a certain area. We had to split up the leaves into different life stages and measure the length and width of their leaves. Then we took the measurements to calculate how much Posidonia was able to photosynthesize in the area. 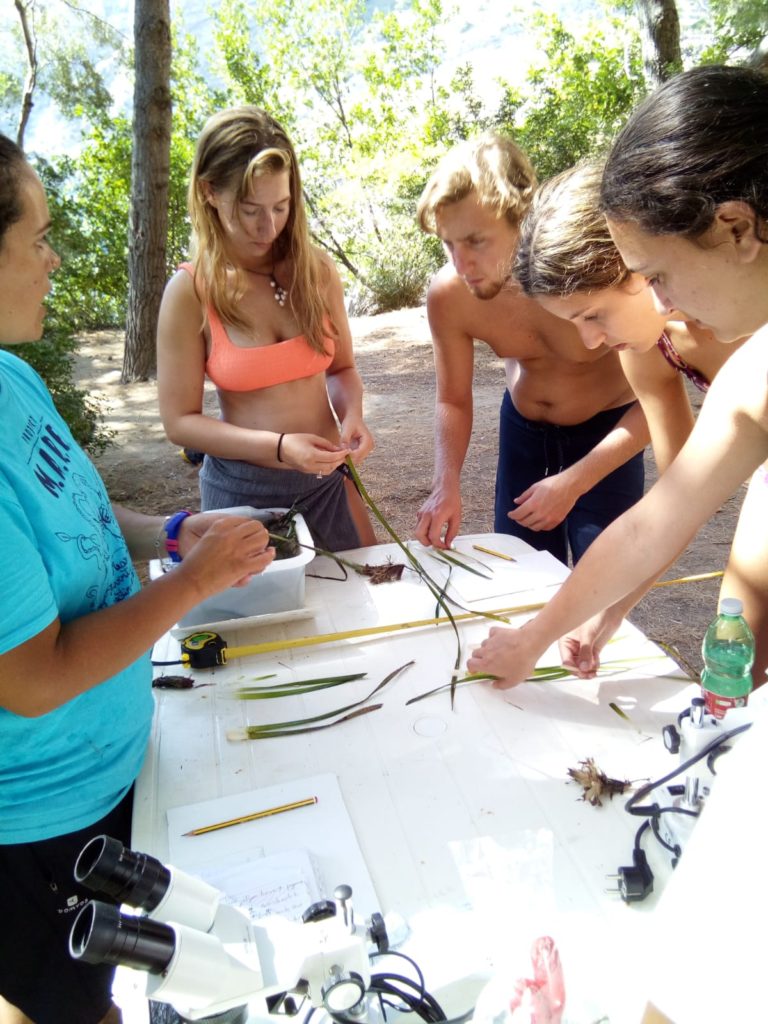 The third group of students went back into the water to draw marine organisms living on the rocks, Posidonia, and any other organisms that happened to be swimming by. We were able to do this by using waterproof boards, pencils, and snorkels while swimming. 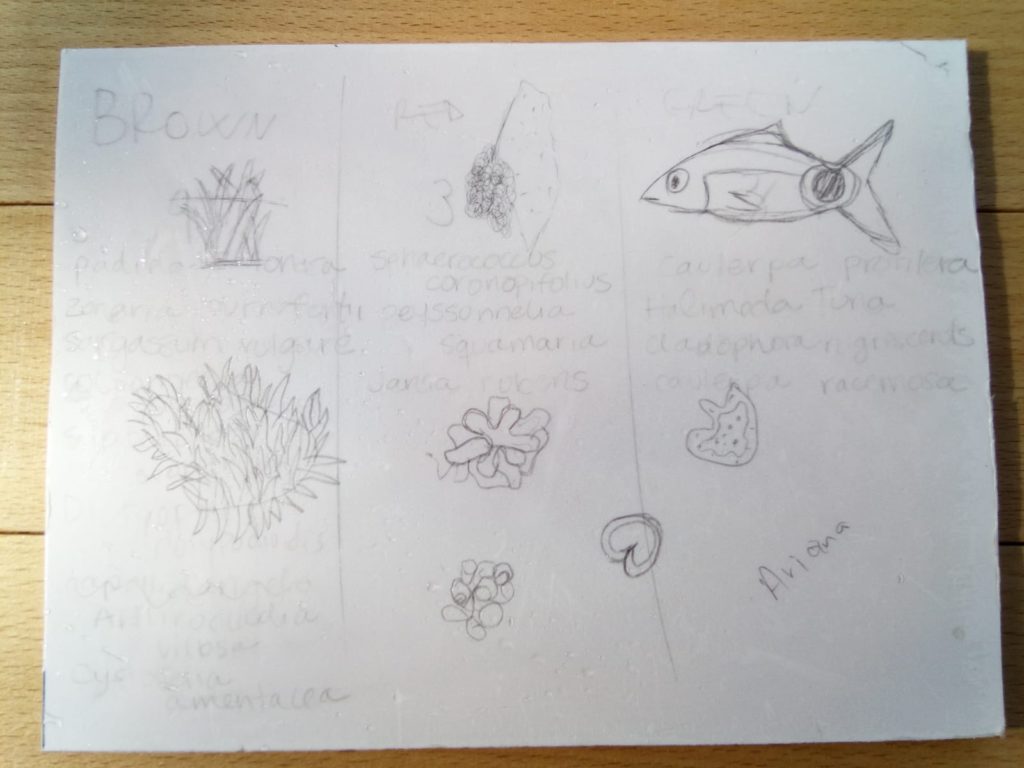 Once our day came to a close, we were unprepared for the uphill hike that lied ahead of them. After the climb back up the mountain, we were relieved to be riding back to Sorrento on an air conditioned bus. Overall, all of us really enjoyed this hands-on experience exploring the bay.

The integration of presentations with field studying helped us truly understand the material and its applications in the real world, everyone can’t wait to return! 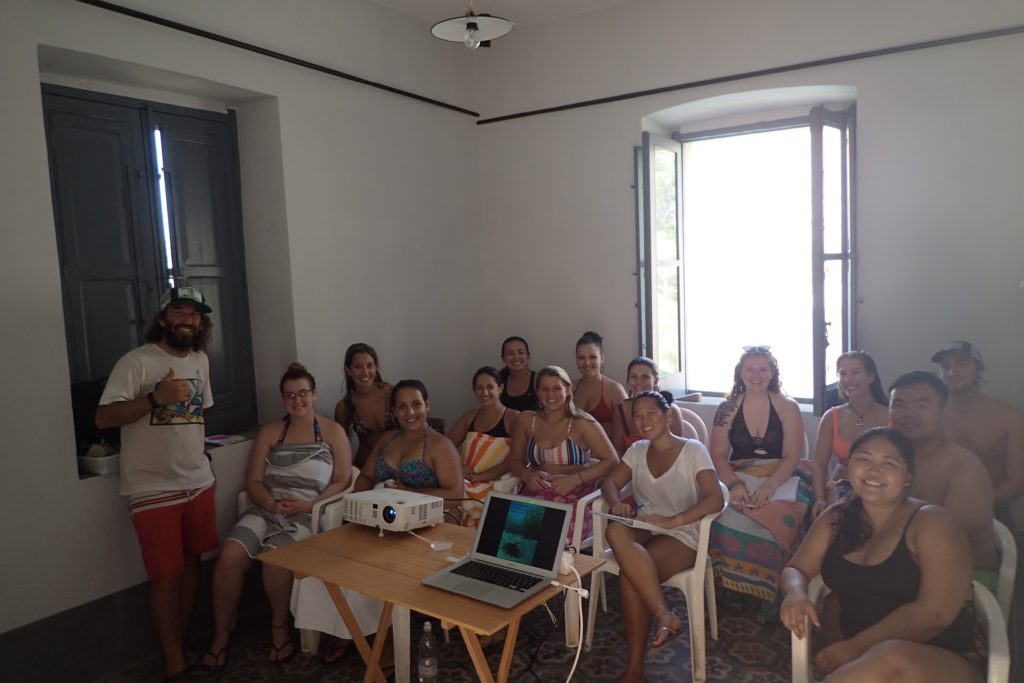