Fisheries in The Park

IERANTO BAY: A PLACE OF WONDER TO PROTECT

The Ieranto Bay is known to humankind as far back as we can record. From its lands we have withdrawn oil, fruits and Mediterranean aromatics; from its waters, we’ve collected plenty of fleshy fishes and found refuge from the sea winds. For its mesmerizing beauty and rich resources it has ever been a place of sacred devotion to the Greek goddess Athena, then the roman Minerva, everlasting symbols of purity, poetry, wisdom and crafts. It has also been a place of magic, mysticism and wonder: Pliny the Old and Homer’s illusive descriptions might refer to this bay as the dwelling of the mesmerizing Sirens. Being the Sorrentian Finisterra, it is the boundary between Salerno and Naples Gulfs.
But times have changed: our everlasting demands for Nature’s resources kept on growing as much as we multiplied and became more exigent. The exploration of this Bay took its toll on the first half of the last century: we razed the land for steel industry  – pivotal to construction and warfare; we exploited its sea with limitless fishing, reckless anchoring and waste disposal, plastic being of most concern.
Even seemingly magical places plenty of resources do not prosper ad eternum if not taken due care. This is the main reason why the Ieranto Bay is under the tutelage of FAI and is also considered a Marine Protected Area. Out of all the measures taken to reassure the welfare of this place and its species, in here we describe the norms of fisheries in the Bay: how fishermen are inserted in this marine ecosystem, how the marine park legislated their craft and what types of fisheries are considered. Last but not the least, we expose the testimonials of some fishermen in regards to their activities and preferences.

FISHING REGULAMENT IN THE PARK AND IN IERANTO BAY

The marine park norms regard traditional fisheries as a homeostatic agent of this ecosystem, being fishermen seen as predators of the marine environment to which an equilibrium regarding fish populations is attainable and enduring if fisheries are maintained within small scale limits. This is why it is allowed in the majority of the marine protected area (with the strict exclusion of some fish and mollusc species), always under the previous authorization of the Marine Park. Ieranto Bay is no different but due to the rising number of visitors in the Summer season, it is not allowed to fish by any means from the 1st June to the 30th of September. Other than this, in the Ieranto Bay is allowed to do professional fishing whilst sportive fishing is not.

FISHING IN THE MARINE PARK: DEFINITIONS AND FISHING SCALE

Professional fishing in the marine park is possible because it is done in a traditional way and therefore serves the needs of the local community. Instead, industrial professional fishing is done at a much larger scale. Applied to the Sorrentian Peninsula it would destroy the populations of its species, several habitats, disturb food chains, therefore it would cause an ecological meltdown and undoable biodiversity loss in a blink of an eye. For this reason, it is not allowed in the marine park.
In its turn, sportive fishing although apparently having a smaller impact on the ecosystem can have serious consequences. If allowed, there would be no control of the net weight of marine life that is taken out of our seas and therefore it would be impossible for us to have references to make conversation efforts. Mainly, for this reason, is forbidden to do sportive fishing in Ieranto and the other B Zones.
That being said, the next three tables reveal what kind of traditional fishing equipment can and cannot be used in the park and how their characteristics are regulated:

FISHERMEN IN THE MARINE PARK: THEIR TESTIMONIES AND EXPERIENCES

In conservation of nature often there is the need of protecting several species and habitats whilst permitting anthropogenic activities to some extent, such as the extraction of natural resources. In this case, fishermen are not regarded as enemies or agents to annihilate from these marine ecosystems. They are regarded as a top chain predator whose activity can be in balance with marine life cycles. That being said, if regulated by law and controlled regularly, fisheries can continue throughout time bringing prosperity to the local community without disrupting nature’s equilibrium. As an example of this, hereafter follows the testimony of Giuseppe Iaccarino, a local sportive fisher that has a predilection for using pots and that fishes occasionally in the zone C of the park.

Peppe is a sportive fisher for more than 20 years; he knows the Ieranto Bay as the palm of his hand and he’s a crucial element of our group too, for he gives us essential help in monitoring the bay during night and day. He prefers to use the fishing rod and the pots and he often fishes in the C zone of the marine park. That or in the roundabouts of Positano or Sorrento.
According to his experience, the best fishing season is from September to October and during Spring since the water temperature is warmer and therefore the fishes are found nearer to the surface.
Peppe uses different types of bates, from fishes to molluscs and always of autochthonous species. He changes it according to what he wants to fish.
In what comes to the pots, he puts them at around 25m deep for more or less 4h. As he says: “When it goes well, it goes well.” Sometimes he manages to fish 8 to 10 cephalopods, but there are days in which he doesn’t fish anything at all. And then, because days of abundance are days of feast and party, Peppe usually shares what he has fished with friends and family. Also, Peppe does not keep nor freezes what he gets because “the flavour is simply not the same”.

POT: Typical gear of traditional fishing; it is a cage that is put on the sea bottom. In its inside is put the bate to attract prey: fish, molluscs and crustaceans. They can be made with osier, reed, wood or iron nets or plastic material. The entering hole has the shape of a funnel and is generally hand made with iron thread or net. With them, one can capture cuttlefish, octopuses, crabs, shrimps, mullets and other. 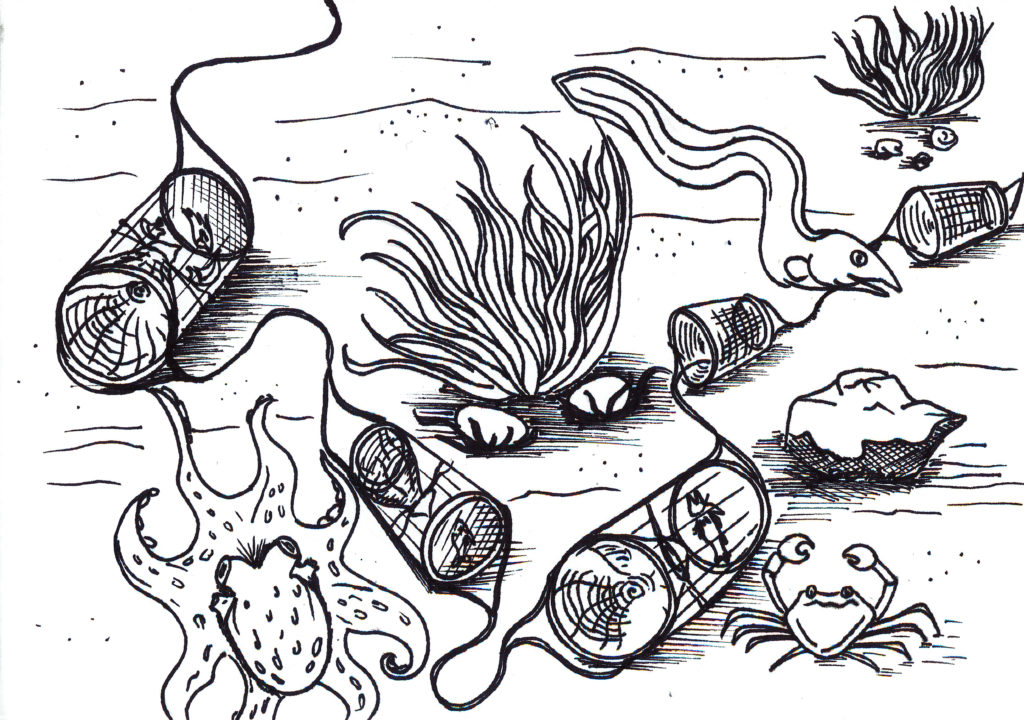