Cilento is a synonym of assessment studies on shore pollution and species welfare and abundance. It means beach cleanings, turtle care, first group dynamics and team work, but also first pizzas, first sun bathe and sleeping on the beach. In sum, tons of nature conservation and lots of party. We started and ended our summer in here.

I remember well rushing from shore to shore to collect and catalog copious amounts of trash that seem to never end as part of the Marine Strategy Framework Directive (MSFD), which is the first EU legislation specifically aimed at the protection of the marine environment and its natural resources, creating a framework for the sustainable use of European marine waters. It’s very much based on the Regional Sea Conventions. A Marine Strategy as such includes:

This Strategy was implemented between 2008 and 2012 and all of these steps should be accomplished in the period of six years; this year we restarted the cycle. The assessment of a marine area and its further analysis of environmental status is complex and is made out of several parameters. One of them is Marine Litter. So together in collaboration with the Italian Ministry of Environment and three Marine Protected Areas, that are Santa Maria di Castellabate, Costa degli Infreschi e della Masseta and Punta Campanella, us and our colleagues went to Cilento to collect and catalog trash from four types of beaches:

Then, having into account also other characteristics, we would sample 3 transects of beach of at least 33m long each separated by no longer than 50m. That meant a lot of beach to clean, lots of trash and countless hours cataloging them in detailed charts. 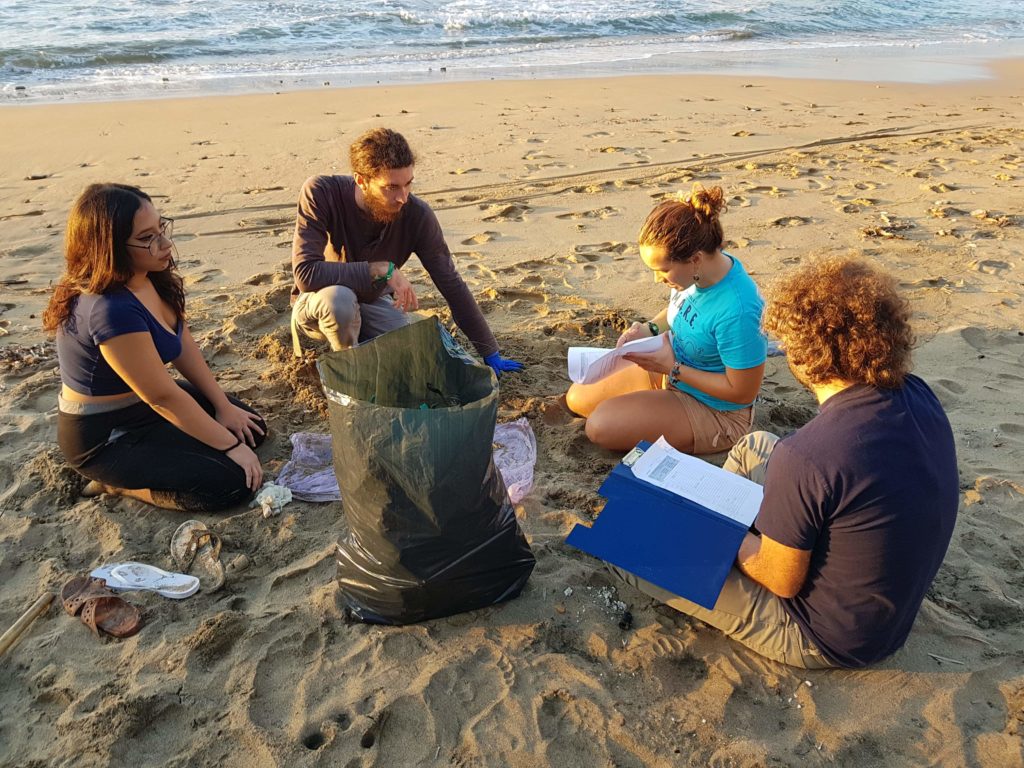 This allowed us to to go back there several times and meet its shorelines as we wouldn’t have dared to imagine: Sapri, Scario, Ogliastro, Spiaggia Lago, Pozzillo e Santa Maria di Castellabate were the places we went under this assessment.

Inherent to these long hours under the sun there were our first deep conversations on life and dream projects, our first swims in between the submerged rocks among fellow fishes; still remember my enthusiasm when I saw my first Donzella pavonina in its exotic colors – something I’ve never seen in my shores.

I think I can speak for all of us on how we’ve realized that trash seems to multiply under our noses: there’s always more and more of it as more you collect.  Batteries of cars, endless bottles and metals, countless hygiene products, syringes, needles and pills discarded most probably through the toilet… It’s what we take from the experience: other than the breathtaking landscapes and unforgettable moments, the memory of endless trash also stays. And several times was not coming from the sea. People leave inumerous waste on the sands, like cigarette buds. On the small beach of Pozzillo, where we barely managed to put the three transects, both times we assessed it we collected around a thousand of them.

Then Joana joined Mimì and our colleague Linda on a hard task, always aiming assessment studies for the Marine Strategy: describing quantity and quality of fish communities and obtain data on the demographic structure for some target species through a method called Fish Underwater Visual Census, which consisted of using two complementary techniques: transects (25 x 5 m = 125 m²)  and random paths (for 15 min).

The data collection was done both inside and outside of the MPAs, at three depth intervals (0-3, 4-7 and 12-18 meters) and in three different types of habitat, which were:

During this period there was also the opportunity to collect some data on the mortality of the bivalve Pinna Nobilis.
Joana was a lucky mermaid: inside Marina di Camerota she assessed Cala Vitiello, Punta Omo, Punta Falconara, la Cattedrale and Palinuro. Outside of it she went to Santa Maria di Castellabate, Ripe Rosse, Punta Licosa, Punta Scalla, Torricelle, Punta Tusina e Baia Trentova. These are the places where she was tackling this assessment.

From these experiences in Cilento we take memories.
For me it’s Ogliastro that appears in the foreground of my mind. That beach of which I’ve never seen its pebbles, always covered in banquettes higher than one meter of dead posidonia leaves. There we all went before the start of the season and there was I by its very end, beginnings of November. A yellowish cold sun illuminated everything, kissing all matter from its very low horizon. Everything was stained with posidonia, from the shore to the high banks where fishermen sit waiting patiently for their prey. Walking alone in the sunset was almost like stepping on clouds, so soft, so absent of solidness… like a dream. One wonders what hides in such massive compacts of dead leaves. That same beach in which I found a battery of a car, where dozens of meters ahead layed bottle after bottle, net after net, bucket after bucket… all made out of plastic.

Lost in contemplation, I found a juice bottle coming from Arabia. I wondered if it would be from Tunisia. Incredible how a moment of sacred communion with nature is profaned with the lack of care and interest, with the ignorance and recklessness of people towards their own waste.
Did it become natural?
The world as we know it does not sustain itself without plastic. We maintain our vertiginous desire for commodity by devouring insatiably natural resources, depriving nature of all its colors and life forms. It’s terrible beyond words.

Twice we collected around a thousand cigarette buds from the same beach, dead turtles, syringes, batteries, a voluminous bag full of chemicals, entangled ropes of dozens of meters… I got tired of it. I got tired of collecting deleterious material from the sands and from the sea, to where it does not belong. Our coordinator and teacher said to me while we counted cigarette buds that plastic is now a normal pressure on environment therefore animals should get acquainted to it. The ones who don’t, sooner or later perish, and the ones who do, eventually persist, adapt and evolve. I didn’t have enough arguments to back up my view but if we all rely on that the world is doomed. The dilution of our endless plastic waste is not a solution to the toxicity and iniquity it represents. The world is dying at a fast pace nevertheless. Unfortunately, concentrating it on a pit or landfill isn’t much of a solution either.

Still, we cleaned all we could. We ran out of bags and so we used the bags and buckets we were collecting from the sea. I forgot how much trash we collected but I do remember the landscape and its feeling. I’ll never know what those banquettes were hiding but I do know this:
I dream of a sea free of plastic.

← Against a Colossus in the Bay
MARE #6 Revisited: What comes next? →