Ischia: an Island adventure in the Gulf of Napoli.

Over the course of a week, Project M.A.R.E. were present on the island of Ischia to help conduct some surveying work for the local marine protected area, Regno di Nettuno. This study was also coordinated with the university of Naples, who had constructed the survey itself: All six M.A.R.E. volunteers would travel around the Island, covering different locations and establishments, through the media of questionnaires.

Our task was to cover beach-goers, beach, boat-rental and diving centre establishments as well as professional and sportive fishermen’s opinions and feedback on their daily/yearly activities and expenditure, amongst other relevant facts. 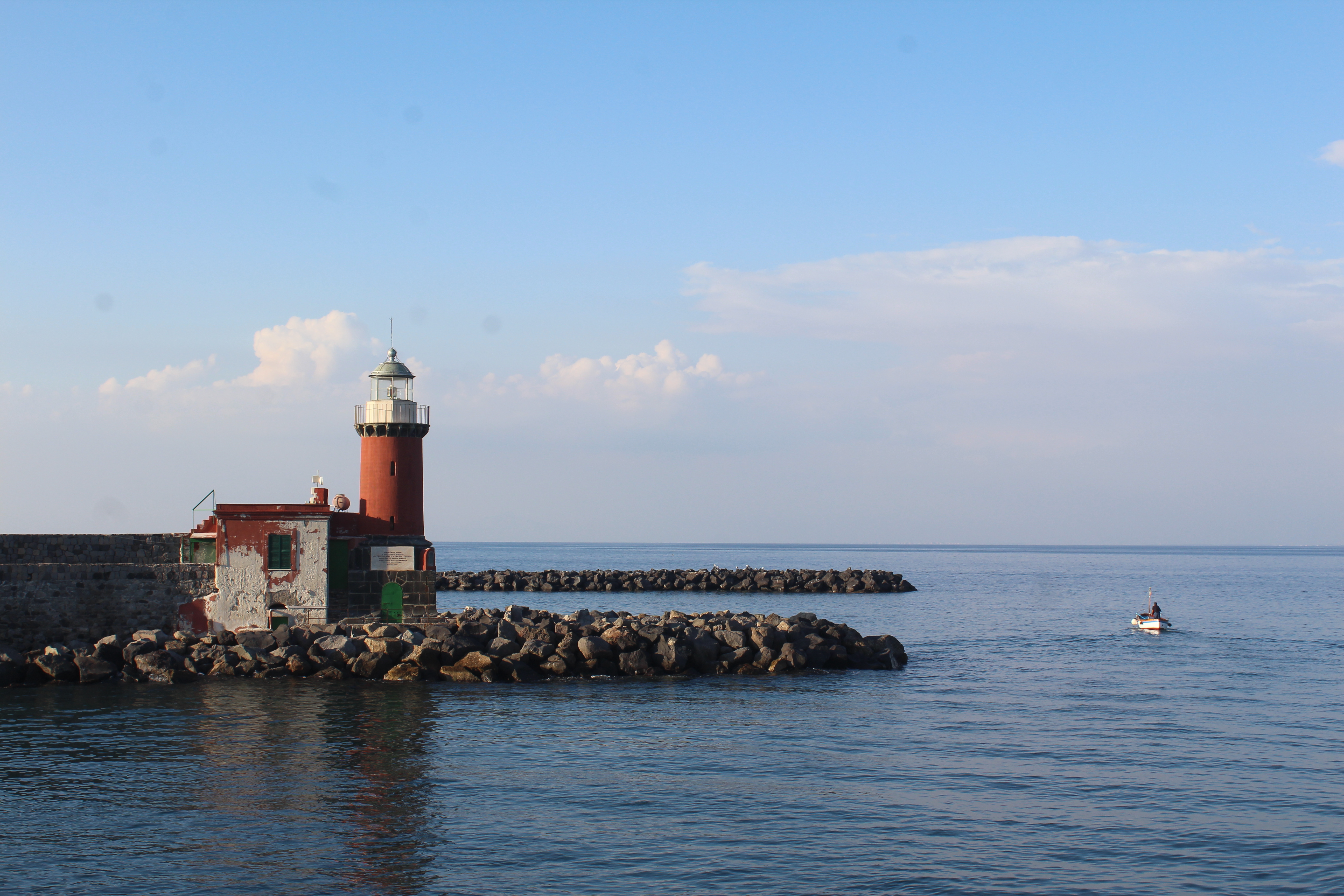 Firstly, Olga and Meli were sent alone to the island with two friends to establish a foothold and to initiate the work itself. 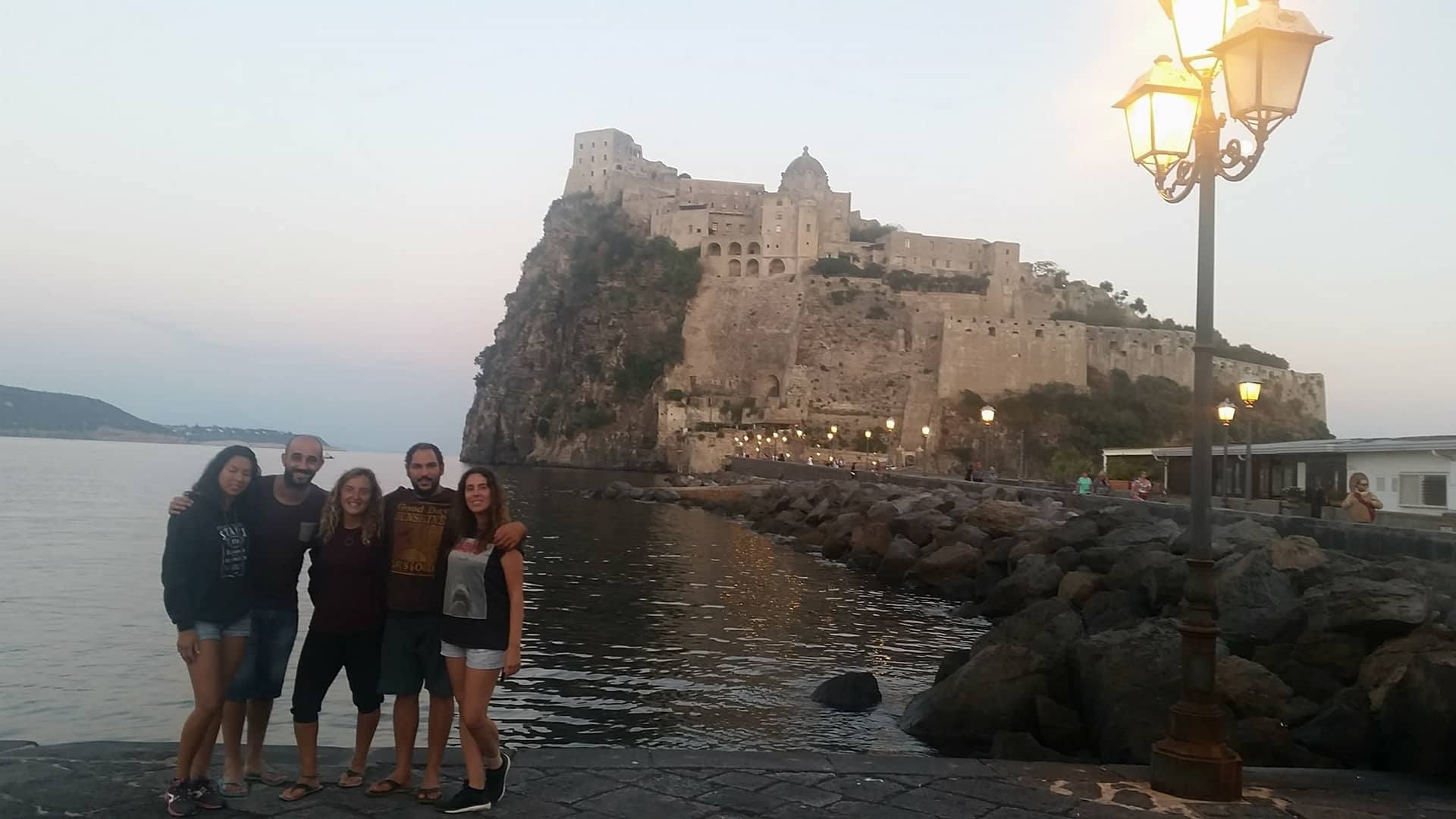 Day 1: Arrival on the Island 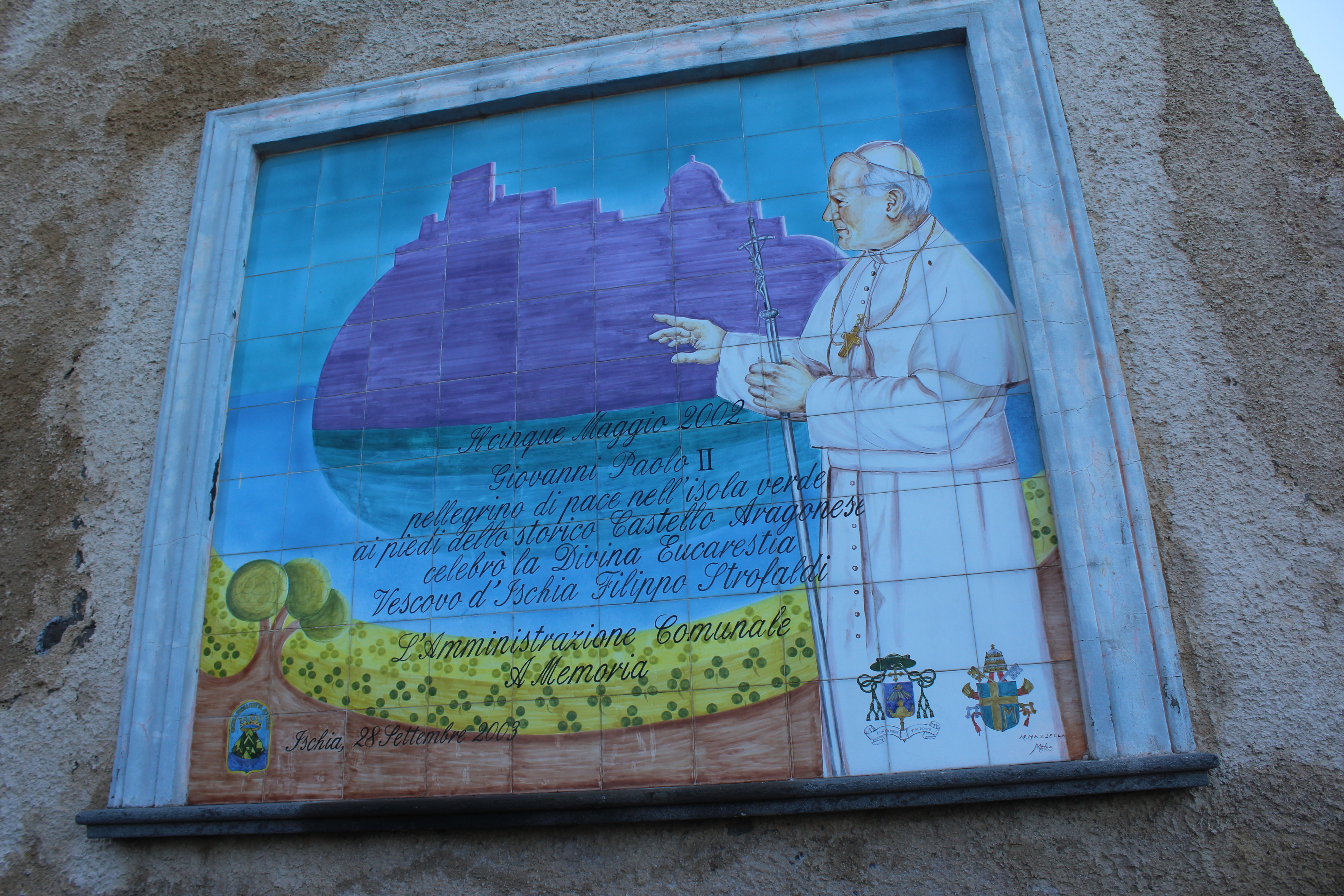 Initially, on Monday, Olga and Meli moved in to the flat where we all would be staying, which had kindly been provided to the project for the duration of the stay on Ischia as a base of operations. It was a lovely spot, really close to the castle of Ischia, castle Aragonese. The rest of the day was spent exploring the islands many attractions and places (especially the cheap and delicious ice-cream parlours) and stocking up on pasta for the week… 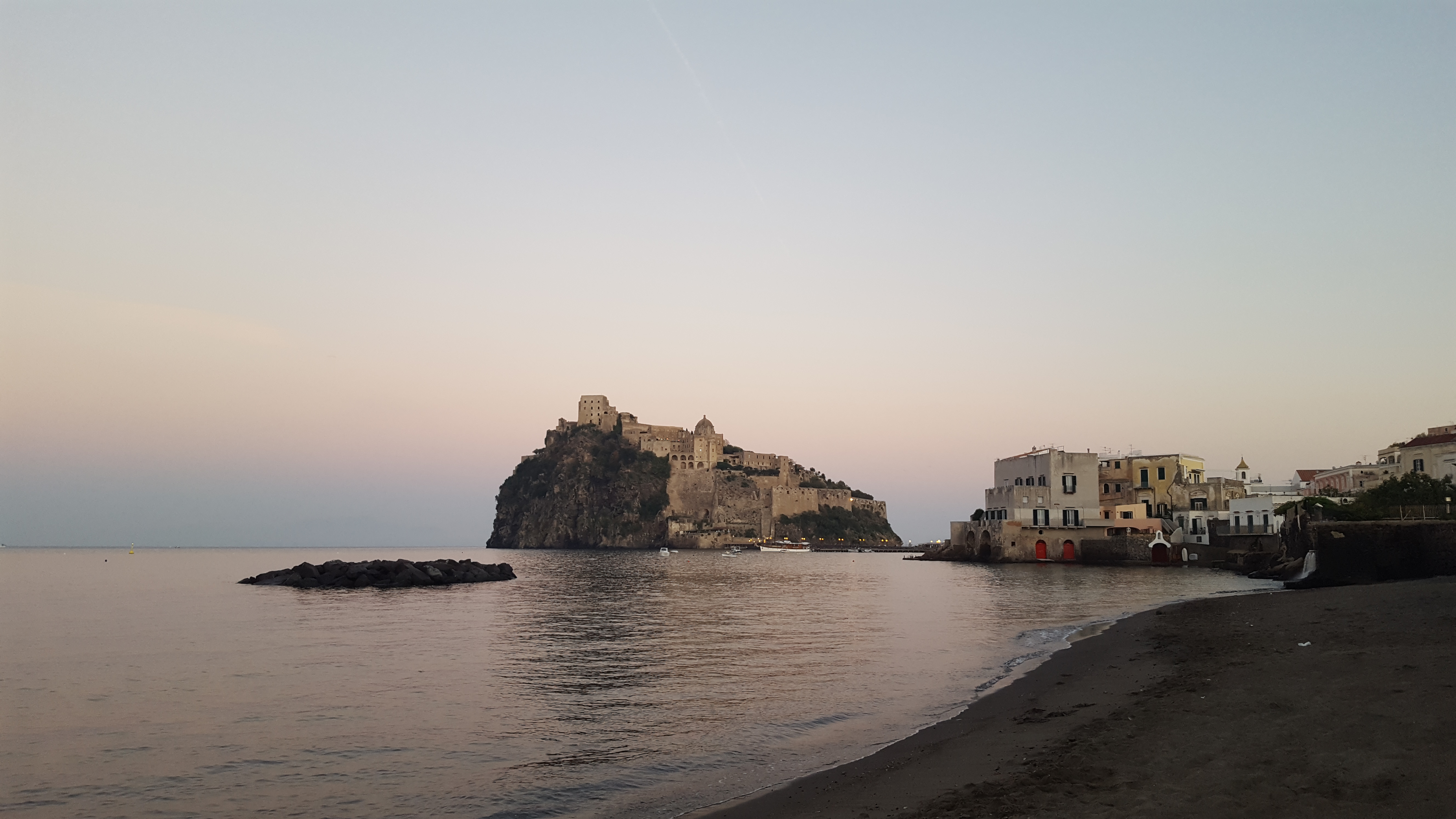 The first task was to understand the Islands transport system: luckily, it is an island, and it’s very difficult to get lost… The work started with the delivery of questionaries to a few of the local diving centres on the Island, and Meli and Olga later staked out places where we could all work. Luckily, the work wasn’t too exhausting, it being the first day, so they had another nice evening walking around the town of Ischia. Also, they found even cheaper and even more delicious ice-cream! 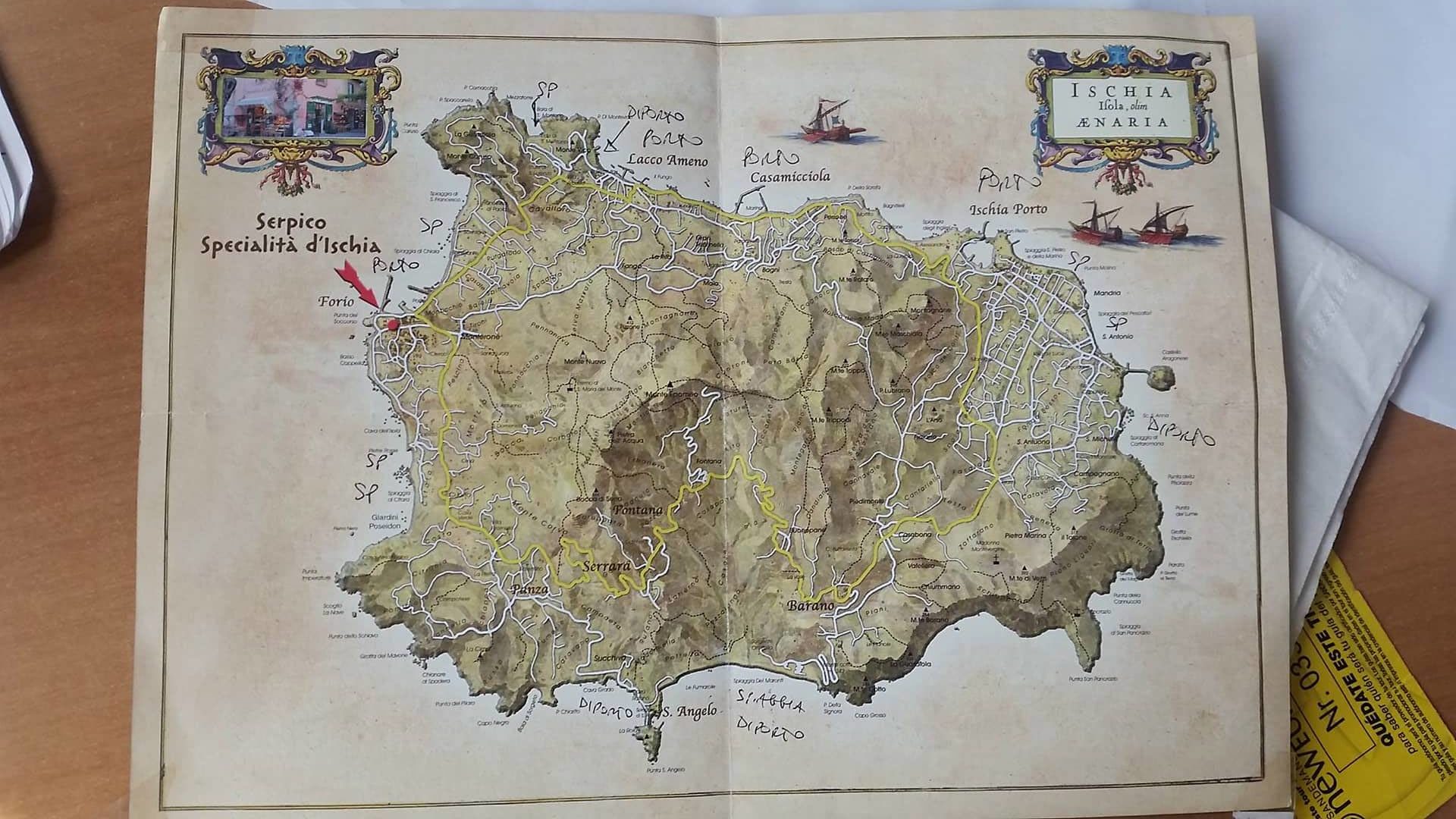 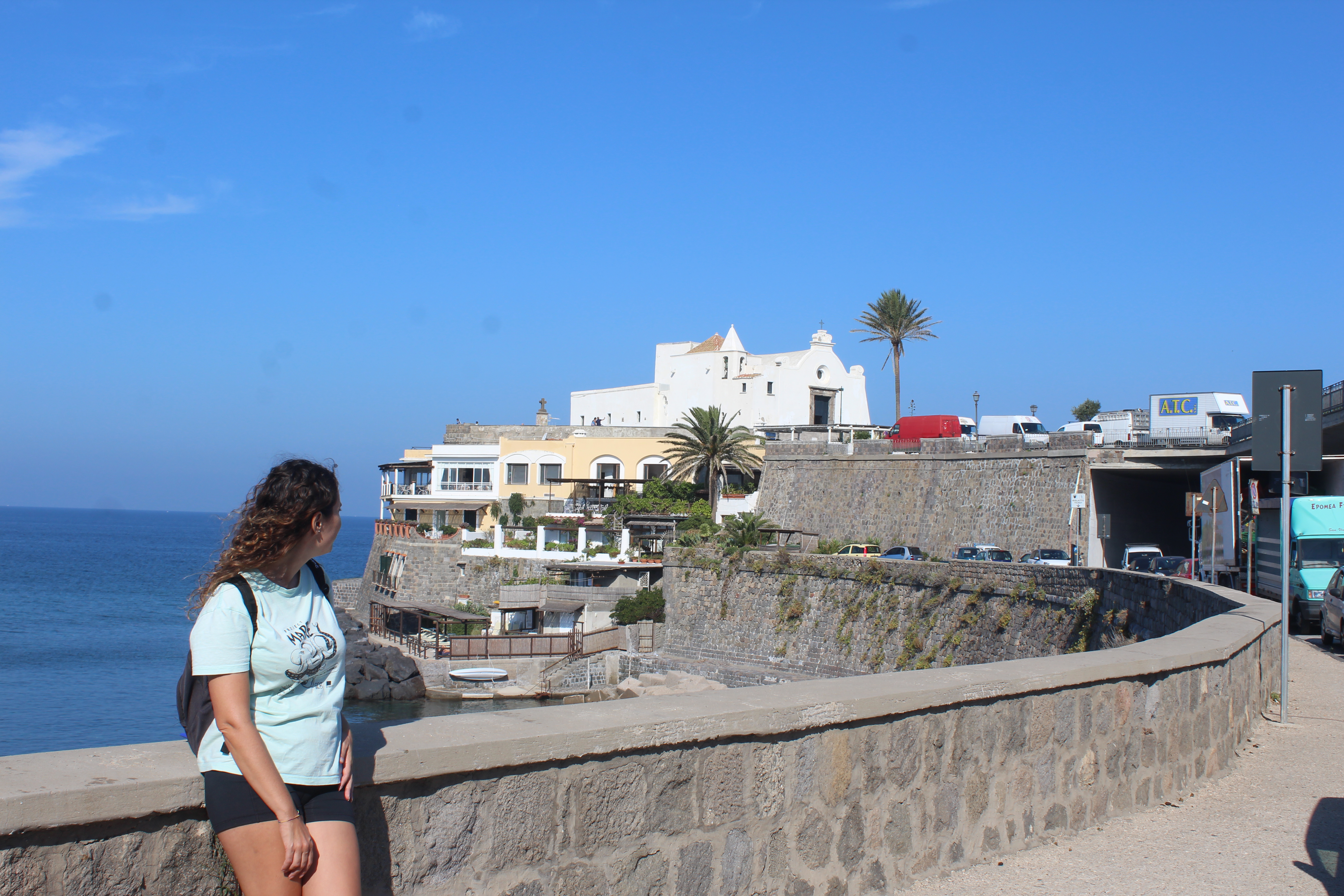 Wednesday started off with a trip to Forio, a town on the west coast of the island. Here, they encountered all the islands ducks  and started working. 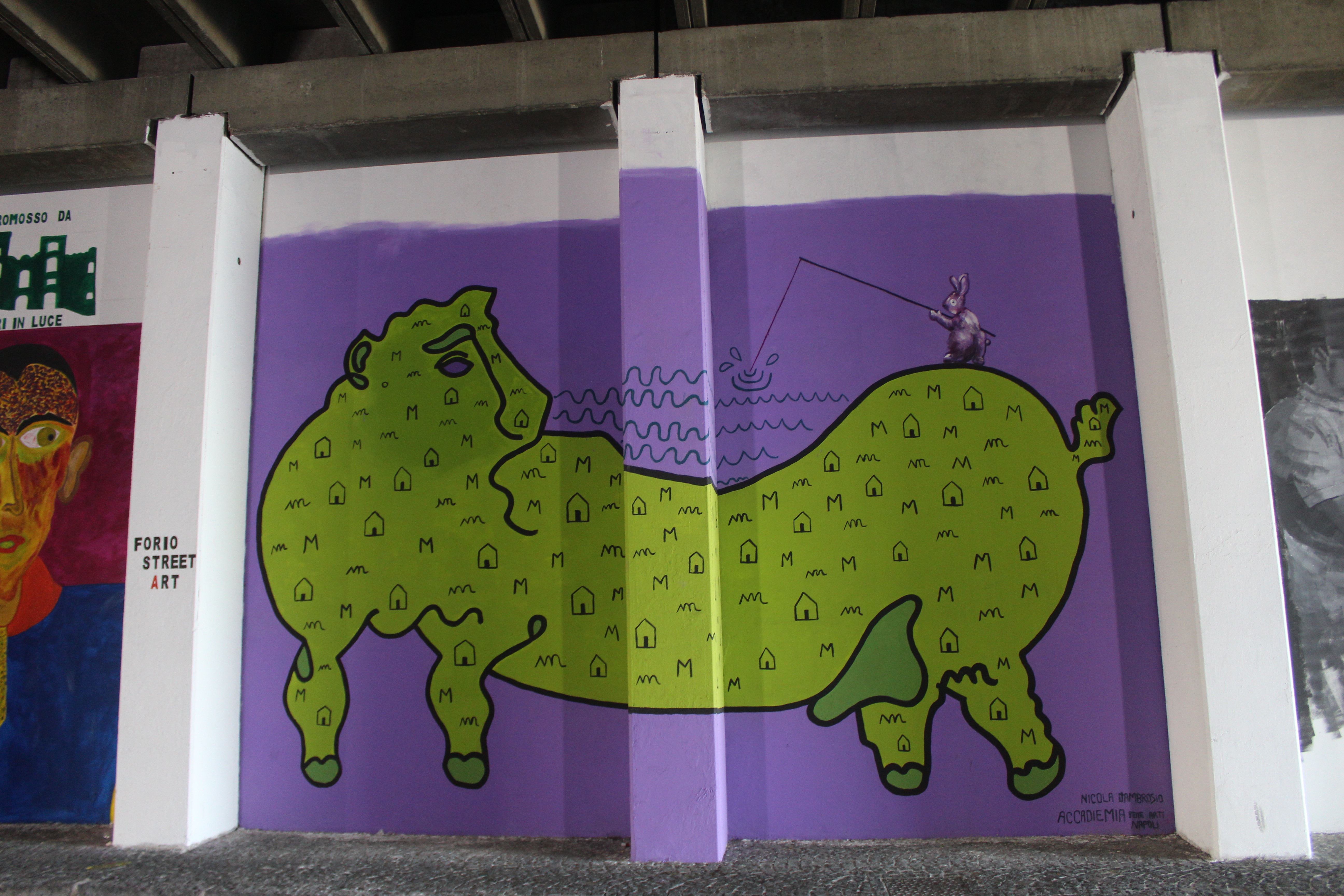 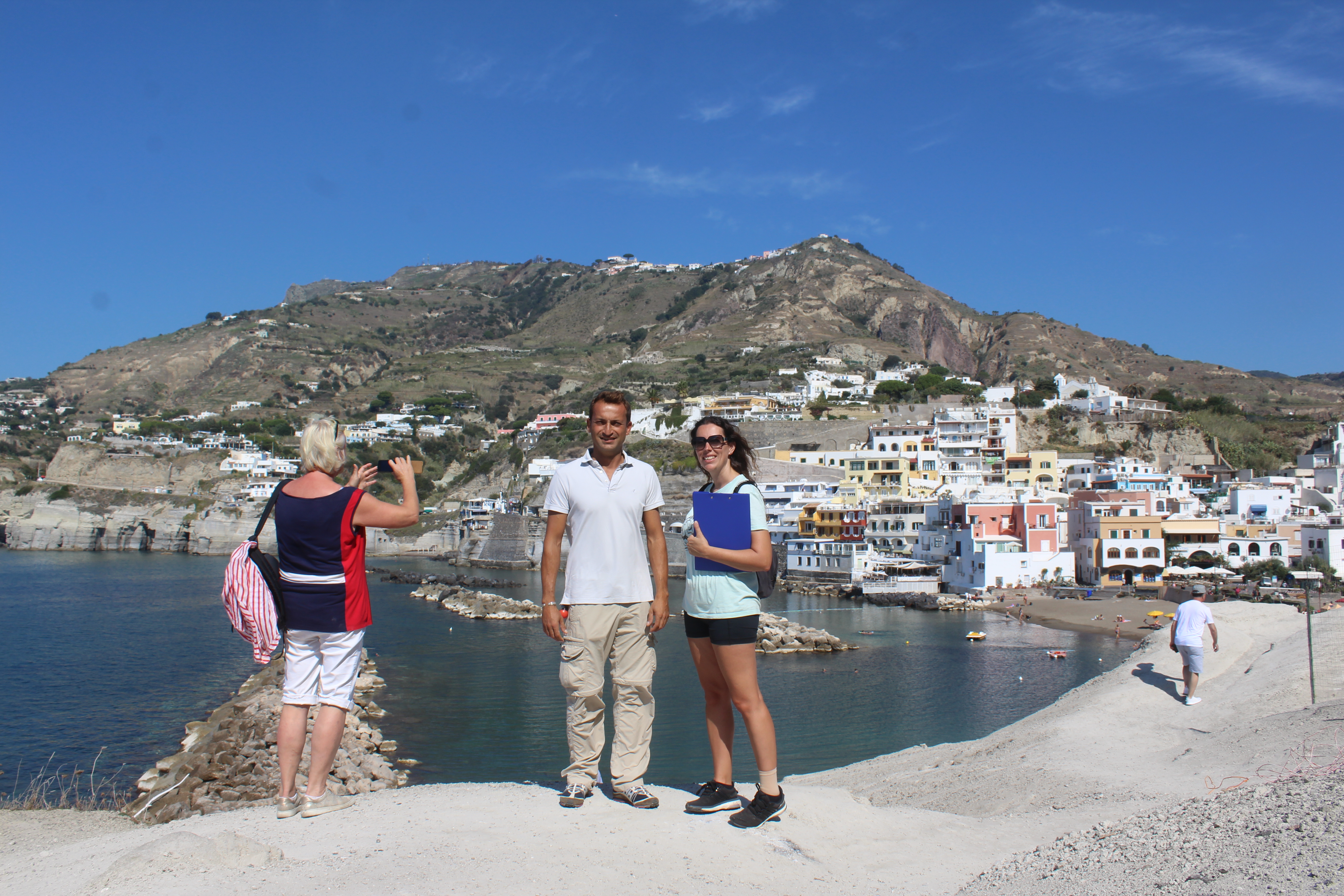 The afternoon was spent in Sant’Angelo in the south, a town with one of the islands longest beaches. There, they got to do some amazing snorkelling and a boat trip with some of the locals, being the first of us volunteers to get to see the underwater world of Ischia. 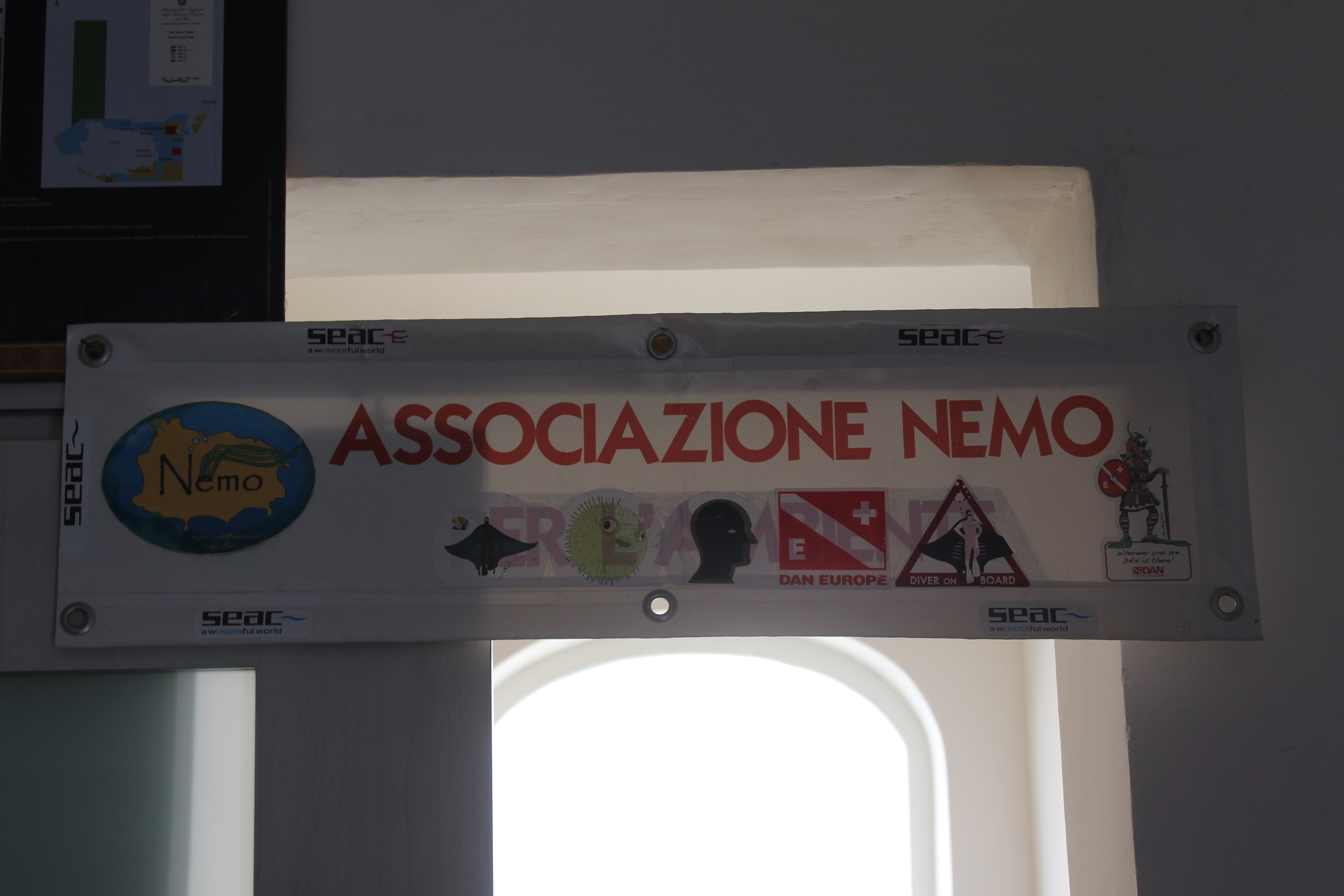 They also helped to locate some anchors which had been left on the sea bottom after an event: MARE volunteers will always seize an opportunity to help the local environment where they can. 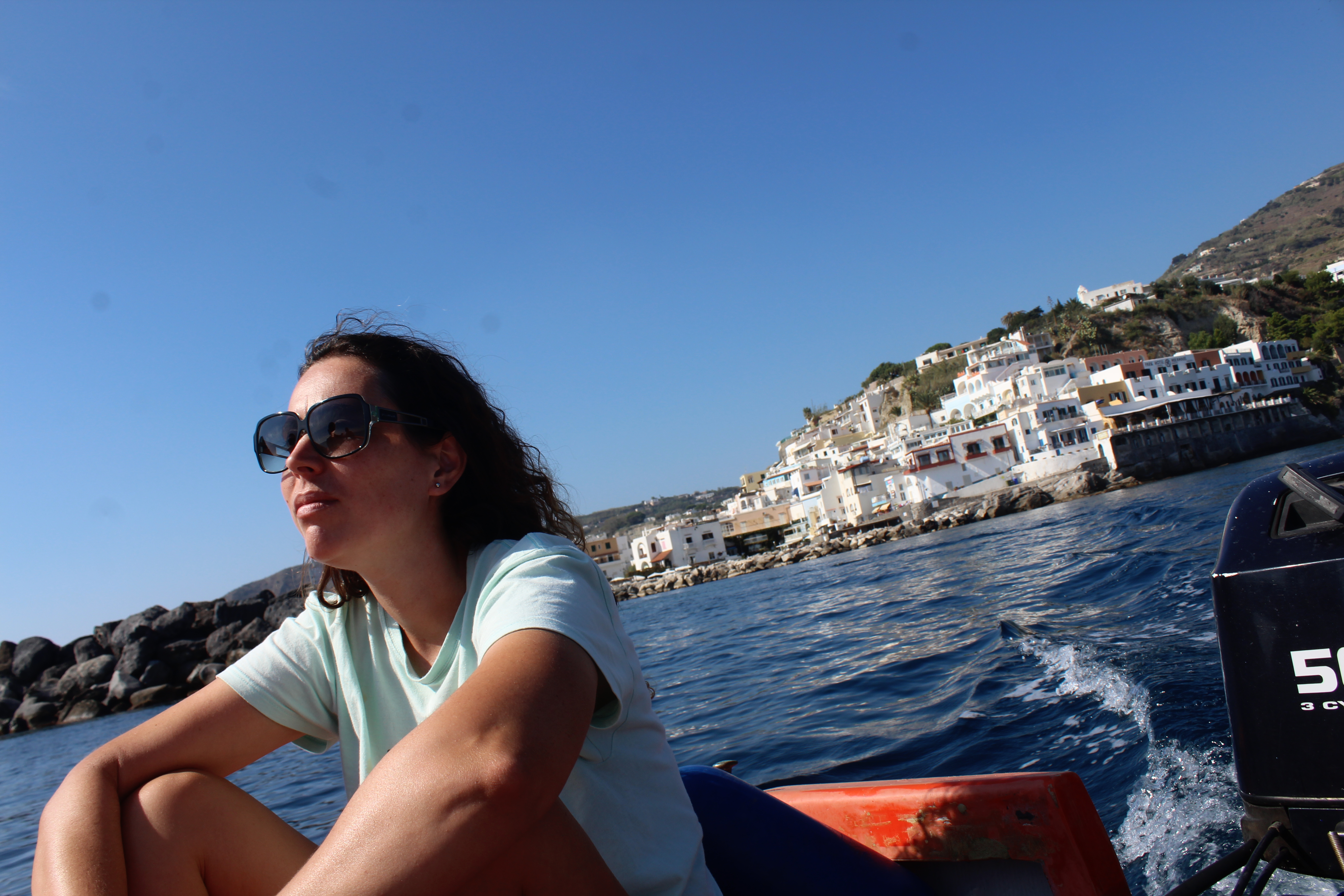 After having used up a lot of calories with the days underwater activities, it was time for a proper first reward for hard work: the cakes of Ischia . Gorgeous strawberry and lemon cakes and other marvels of the Italian “dolce”.

As you may have noticed, the running theme of the first half of the week was fun and food.

The evening was spent in one of Ischia’s famous thermal baths, with the dark having scared off a considerable amount of the German tourists who had swarmed the island early autumn. Day 4: Arrival of all volunteers & rendevouz.

Thursday morning, the four-remaining stumbled off the ferry onto the island: Henrik, Felipe, Anis and Indra. The first thing we noticed, was how lovely the island looked, but also how many Germans there truly were present on the island… Without really stopping to rest, we divided ourselves into groups and scattered along the islands coastline. Anis and Henrik decided it would be a great idea to walk the whole northern section of the island, covering about 1/3 of the islands coastline. They got to see what must have been the cosiest beach on the island: It was worth the blisters…

Indra and Felipe established a more static area of operations on the beach of Forio, where many seem to have gathered to enjoy the early October sun. The exotic beauty of Indra’s blond mane and Felipe’s dark mysterious southern debonair manners served them well, however it was only foreigners who found it exotic enough to agree to fill out the survey. Olga and Meli continued to work up north and also found some lovely vantage points around the Island in the process, continuing the trend:

Then they had the notoriously difficult task to get the local fishermen to share information about their work and catch. Of course, this had to be near the bunches of nets that littered most of the smaller ports stonework. 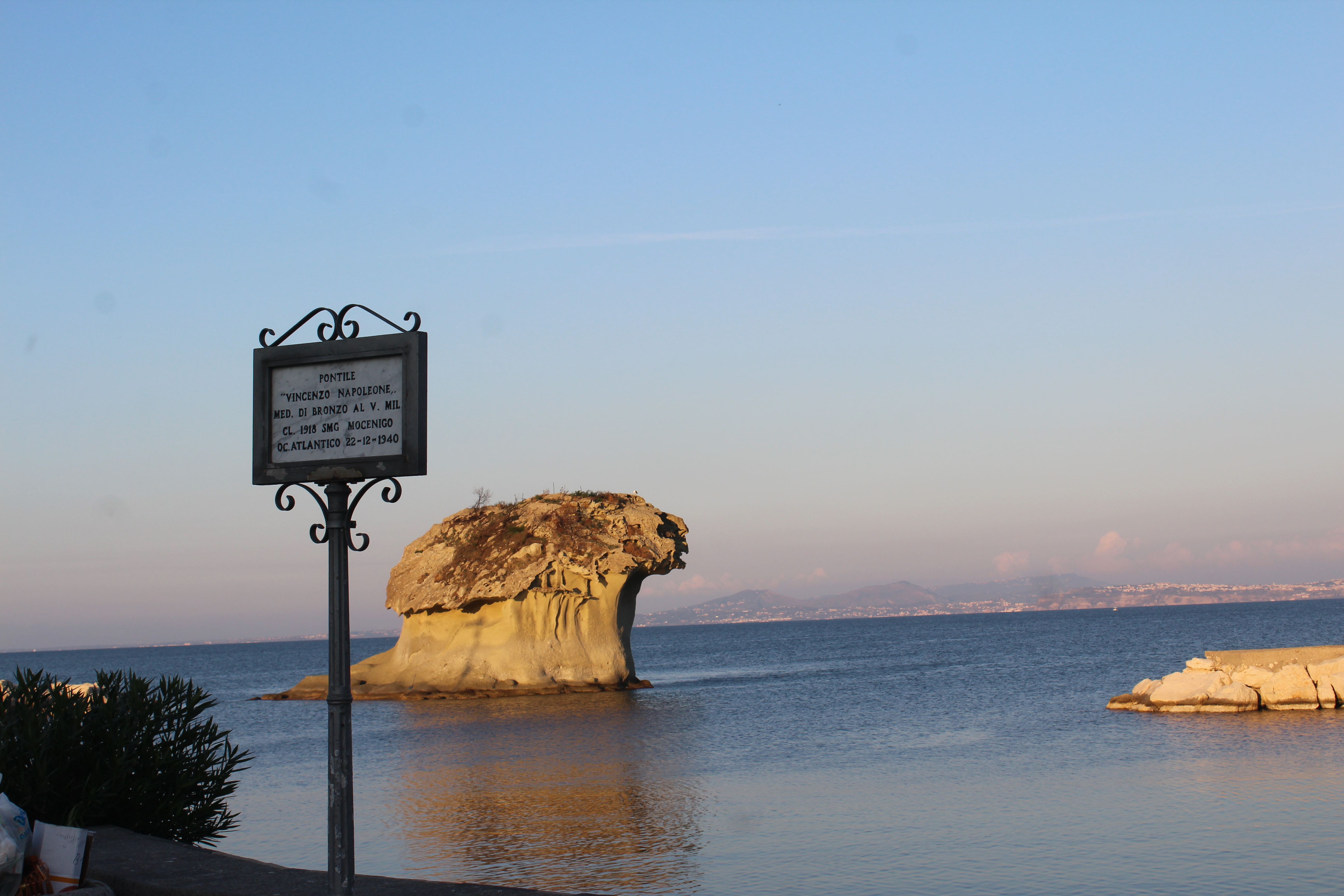 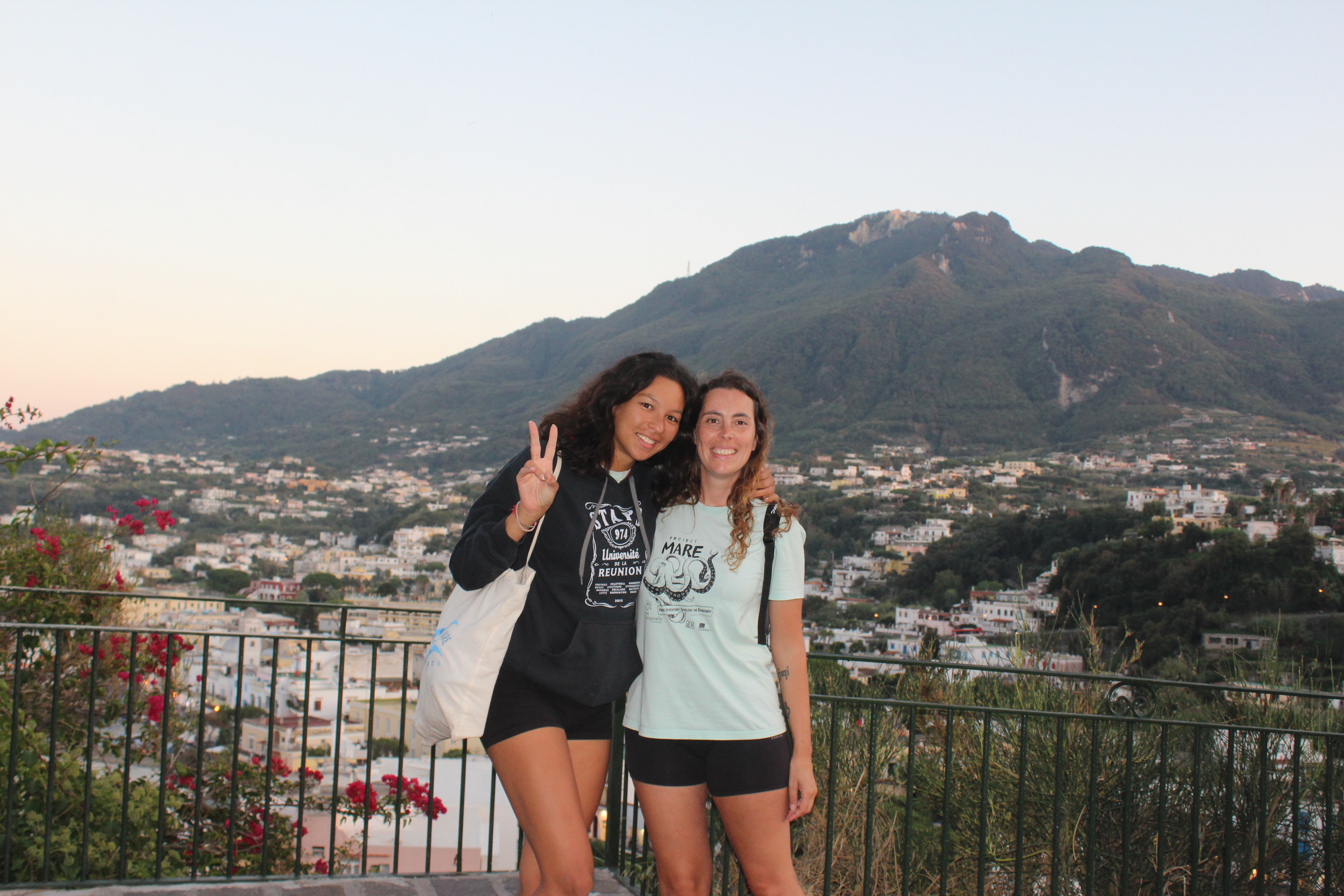 With everyone being starving after a hard day’s work, but also unwilling to have to cook, we managed to find the cheapest pizza place in the vicinity and gorge ourselves full: an evening well spent! In the morning, we all got together in the port of Ischia for some coffee to manage the next few days. Since Olga does not have a taste for fish, she obviously had the privilege to go to talk to the fishermen selling their catch at the local fish market.

The rest of us got the great idea to head to the municipality to fish out some information we needed about the beach-establishments around the island. Luckily, the staff were very kind and helpful, and provided us with more than could ask for.

So, having gotten a lot of work done, we stayed together this time and decided to cover all the towns and survey targets as a group all over the Island.  To finish off, we had a lovely stroll along the beach near Sant’Angelo in the south, picking some local fruit to eat on the way as well. We also tried a local thermal pool, however, it was totally full of green-mud-covered Germans… When we finally had made our way back to the flat, we decided to try one of ischia’s most famous exports: the wine! Of course, this would be accompanied by homemade pasta with mozzarella and other Italian delicacies. We all managed to try quite a few of the wines…

All volunteers made another round through the islands towns, making sure we had done a good job and collected all the remaining surveys left around the Island. It was a relatively calm day, with quite some walking, and a lot of wind. Surveying beaches with sand in your face is quite difficult… so we managed to get some actual sightseeing into the program in the end. The decision was made that we hadn’t tried enough of Ischia’s wine, so the evening was spent indoors playing Tunisian card games and poker (without cash we are poor volunteers).

After cleaning the flat together, the four-remaining headed for their designated locations for work. Indra and Henrik went together to Procida with Nuria (our mentor) and Francesco (our friend) to talk to people on boats in the ports and local fishermen. Procida being a small Island, it only took a few ours to cover in its entirety. They found out the views from the sea were as beautiful as those on the land as well: Anis and Felipe Were sent to Sant’Angelo to do some kayaking-surveying. Luckily, the sea was relatively calm compared to the day before. Since Felipe and Anis later told us they spent half the time trying to empty the kayak of water, the day before would have had to include snorkelling gear as well… After a long hot day of work it was then time to depart for our home port in Sorrento. With the amount of walking and talking we had done, naturally everyone slept on the trip back… it was ferry nice.

← The Olives in Ieranto Bay
Enough with plastic →