And finally, the day arrived. The day of the boys have been waiting for a lot of time ago! The tour in the Bay of Ieranto!

At 9:30 we were all in Nerano: Imen, Andris, Mimi, I (Joaquin), 32 small “wild animals” and some of their parents! A day full of unforgettable moments to enjoy, to go with friends to a place of dream … in general, a day full of adventures to be in compliance with the marine environment. 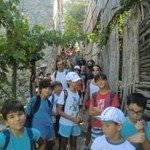 The descent to Ieranto was slower than usual, because we all went together and we were so many! which marked a slower pace. I went in the vanguard with more impetuous youth, Mimi and Andris took care of most of the group not to have accidents, while Imen was in the back of the team with the others.

Once in Ieranto, the faces of the boys once they saw the bay showed not only their youth but also a lot of happiness and amazement! 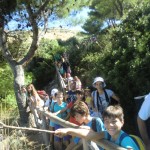 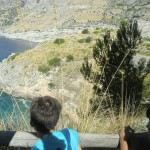 But before they started with the bath in the sea, the boys listened to the information on the biodiversity of Ieranto bay, thanks to Mimi. Valuable information that I am sure will be useful for them in the future. He talked about the animals that they could see in to the bay, the places where they live, etc. 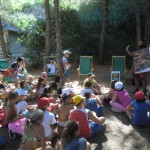 Then, we split the kids into 3 groups. The first did kayak and snorkeling for an hour and a half. 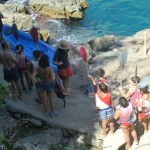 While, the other two groups had carry out different activities: draw their favorite animals or marine plants, color, design a seabed and, of course, receive information from us about the animals that have drawn! It ‘a good way to learn, because it is easier for children to remember that any information relating to their intereses and who love to draw. Among the finished design and drafts we took the opportunity to eat a sandwich or take a bath, waiting for colleagues from the sea. 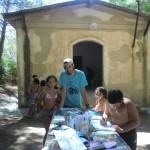 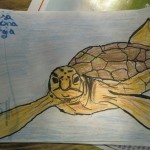 The anecdote of the day concerns two guys who tried to stand on the kayak and … splash! Both in water !!!! But I was close to them to turn the kayak and help them climb. The others children laughed a lot! Those in the water a bit ‘less …

The day ended with the strawberry on the cake. Paint and assemble a series of puzzles that we designed for them, that is, a turtle and a jellyfish! Really nice. 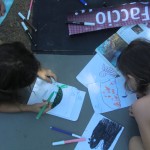 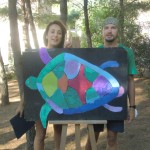 To sum up the day: 32 children, 15 parents, a blue sea, canoes darting, fish that we cuddled, a bank of anchovies, a moray eel in the cave, Liggiu bluer, a sargasso sea grass here and there, so many mullets and colorful guarracini like children who came with us in the most beautiful bay in the world!