The morning of 18th of April we did a study visit in a recovery center for turtles, a branch of Stazione Zoologica Anton Dohrn di Napoli, where Sandra and Gianluca, two doctorates in Marine Conservation, awaited us. The place itself holds a heavy energy in it: for decades it was a slaughterhouse, then it was in disuse for several others and finally it was adapted and converted to a turtle’s hospital. 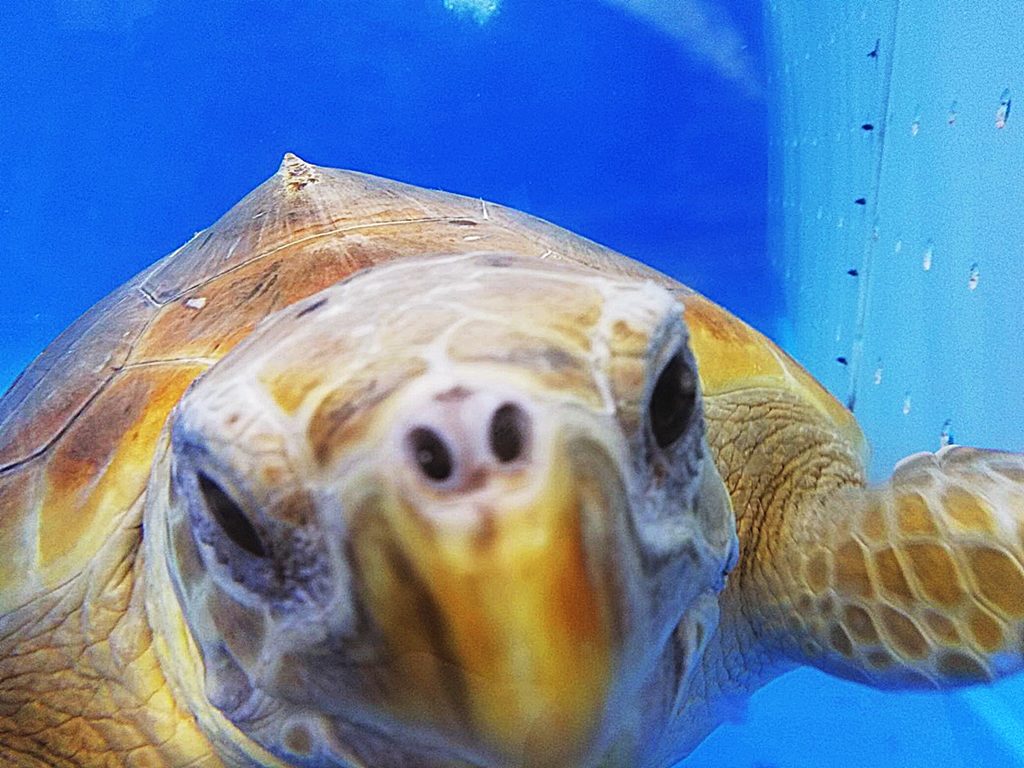 Inside we found what is hard to see: around 20 Caretta caretta turtles all someway damaged by anthropogenic activities. Sandra told us the story of each one of them. The majority got caught by fishing nets as bycatch, others were hit by boats, others were seen floating abnormally – all in all, they all have different damage extents in their bodies, from acute stress to lost flippers, broken carapaces, scratches and cuts throughout their skin.
And even being so, these turtles were the lucky ones. Why? First is because they weren’t dead by the time fishermen noticed them. Second, fishermen bothered to contact the marine park instead of releasing them again. Many times they do not and that happens for mainly two reasons: it’s time consuming and it can put some fishermen in danger since they might be fishing out of the allowed areas, giving them problems with the coastal guard. That being said, only around 10% of the fishermen in the area collaborate with us – we estimate that more than half of the turtles that get trapped are not declared and therefore they are released in the sea improperly. Making things worse, around 50% of the turtles found have plastic inside their digestive systems. These account for the average 120 turtles found yearly in the shores of Campania, half of them dead.

Since bycatch is their main threat followed by plastic ingestion, we describe here the four types of net fishing and the impacts they have on turtles populations:

Unfortunately, the majority of the wounds they get compromise them permanently. Other than affecting their swimming ability, not having a front flipper for a male does not allow him to clamp the female’s carapace with the nail he has in each of the front flippers for that effect only, making it impossible to mate and generate offspring. On the other hand, a female without a back flipper cannot successfully dig and hide a rookery for laying her eggs, which is pivotal for their incubation and protection.Having their carapace broken will in most of cases affect their floating and equilibrium, having many times the need of attaching to their bodies different weights of lead to regulate it. In brief, all of these injuries compromise all of their senses and locomotion, therefore compromises their feeding, swimming, mating, evasion and protection strategies, decreasing their overall fitness and rendering them more fragile and vulnerable.

This is no joke nor light subject. Only one in a thousand hatchlings make it to adult age. Turtles have been here as long as dinosaurs and still they managed to survive to their cause of extinction. Our never ending demands for sea resources are putting them in danger as they never were before. That’s why the works of people like us, like Sandra and Gianluca, and Centers like the SZN is crucial.

Nevertheless, there are three outcomes when turtles arrive to the SZN:

Sadly, maintaining these facilities is not cheap and the disastrous effects of our marine resources requests neither. Still, we fight and we’re hopeful that our efforts do make a difference and that by sharing them we can shed some light on the innumerable struggles marine biodiversity faces.

It is time for all of us to be aware and care about this living system, which is the Earth, as a part of us, as we have always been a part of her. Consuming less marine products and having more ecological habits is key and urgent as never before.