MARINE TURTLE`S LIBERATION IN THE BEACH OF PUOLO

In the morning of 7th of May we went to the beach of Puolo to help the Istituto Zoologico Anton Dohrn (SZN) to release four of the several turtles they have under care. Joining us in this extraordinary and joyful event there were several high school students, citizens and some of our friends too. Surprise and excitement were in the air, everyone was ready to take some pictures and even underwater divers were all set to picture the first swims of these turtles after such a long while.  A van arrived with four small tanks inside, each for each one of them. 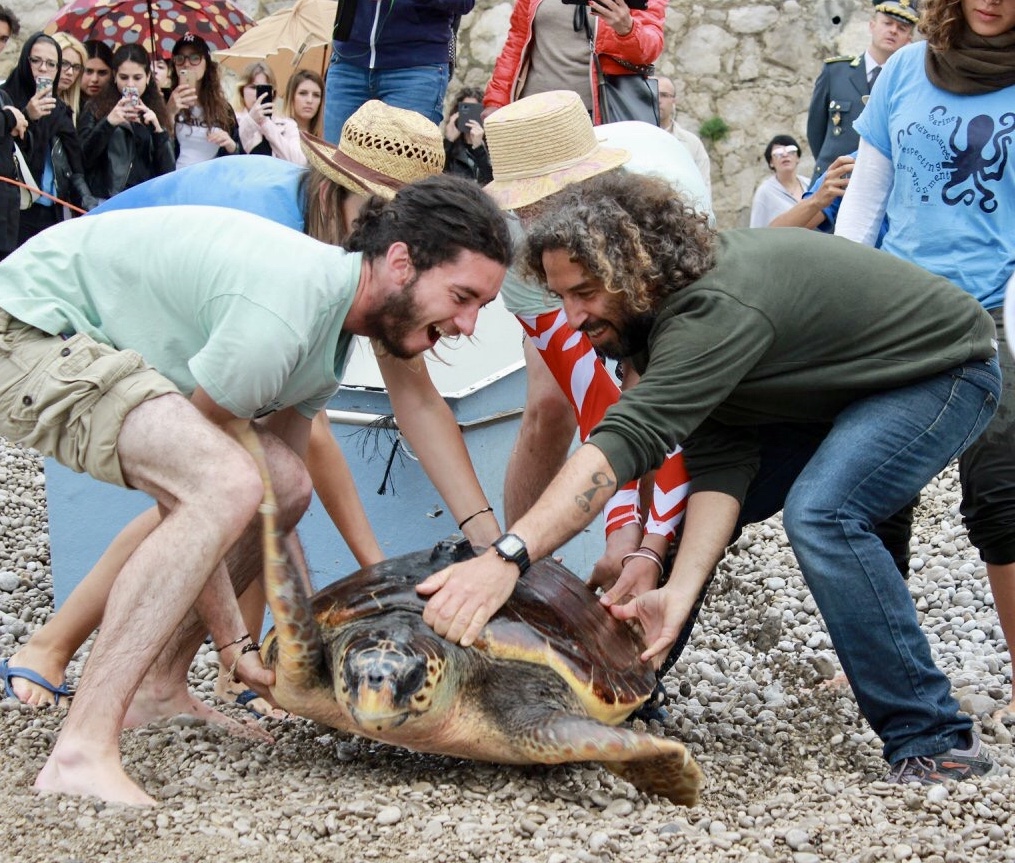 But who are these turtles and what is their story?

Salvatore, Prometeo, Cicciotta e Callipo. They all are strong and painful examples of what goes wrong recurrently during a turtle’s life in these last “anthropogenic” days. They are all individuals from the species Caretta caretta and they all share the misfortune of being caught on fishnets some months ago. Luckily Sandra, Gianluca, Maria Pia and other colleagues from the SZN were able to save them. Salvatore is our biggest adult fellow, weighting more than 60kg. He was caught by a bottom net in February and had no major wounds from it. Prometeo is a juvenile (meaning that it still hasn’t reached to mating age and therefore is less than 25 years old) that also was caught on a similar net. Cicciotta was seen floating for a couple of days in the sea; clearly she had some floating issues. Last but not the least we have Callipo, also a juvenile caught by a net that caused him some wounds throughout his body. All of them had severe trauma from the stress of bycatching, which is reason enough to keep them in a turtle’s hospital for a considerable period.

They were lucky for several reasons. First is they weren’t dead by the time fishermen noticed them (for more information about the main threats for turtles check here). Second, fishermen bothered to contact the marine park instead of releasing them again. Many times they do not and that happens for mainly two reasons: it’s time consuming and it might put some fishermen in danger if they might be fishing out of the allowed areas. Only around 10% of the fishermen in the area collaborate with us and we estimate that more than half of the turtles that get trapped are not declared and therefore released in the sea improperly. Every year around 120 turtles are found in the shores of Campania, half of them dead.

Why is not reporting living turtles after bycatch considered improper?

Being caught by a net is very stressing for a turtle – other than being trapped, they might not be able to move, or they might be hit several times by fish, rocks and other debris, they might get wounded in the process and/or due to the hook they confused as solely bait and for sure they might not breathe when they need. As marine reptiles, turtles can (and some species do) live in the water but they cannot withstand long without coming to the surface to breathe. For all of these reasons, after improper release stress might cause them difficulties to recover the sense of orientation, to recover from the wounds inflicted, to search for food and eventually cause a slow death. That’s why if a turtle is caught in a fishnet and even if the turtle is apparently fine, it should always be reported to a turtle’s institute or to the nearest marine area.

Luckily these fellows were reported, rescued and saved. Their health was good and they were ready to return to the sea and to travel the long distances they usually do, maybe even to find a partner, since the mating season is about to start. It is always an incredible moment, the one of releasing in the wild a recovered individual of a threatened species. One dedicates one’s life to them, puts all the effort and art in the mastering of taking care and saving what others so recklessly destroy, to release them once more to where they belong, having faith that everything will work out the best way possible and that one’s gesture in the long term makes a difference. Those are moments of celebration. But on one hand lies hope and on the other uncertainty. Let us all hope for the best and that these amazing creatures thrive once more in their astonishing but fragile sea world. At the end of the day it’s up to each one of us to mind and take care about our trash, our eating habits, our purchases and therefore our environmental choices. That is the only way we can take care of our sea, our lands, our home.

← VISIT TO “CENTRO DI RICERCE TARTARUGE MARINE”
SCARIO AND THE GULF OF POLLICASTRO: A HIDDEN PARADISE IN THE WEST PART →