The third Pro Loco day was on August 1. It was a very hot and sunny day with no clouds whatsoever. The kids were delighted, I was semi-dehydrated. The topic was posidonia, a little known yet extremely important submarine Mediterranean plant that harbors many fishes and micro-organisms (for more information you can read here : “My name is Posidonia” ).

I was with Gaelle (if you want to know who she is, you can read “Allow us to introduce ourselves” ), who was present during the first two Pro Loco days. All the kids knew her and liked her so much that I am sure she could have convinced them to eat Brussels sprouts with no cheese. 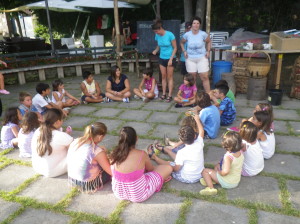 My interactions with the kids were much different. The first kid I talked to wanted me to write his name on his tag. After having chosen the color he wanted, I wrote his name. He looked at the tag for a few seconds with a perplexed look, took the pen from my hand, and added a second “a” at the end of his name. I asked a bit surprised: “Is your name spelt with two “a”s?”. He looked me right in the eye and plainly told me: “The first one doesn’t look like an “a” to me”. I didn’t know kids were so detailed-oriented nowadays. Now I know.

After having given a tag to every kid, we could start the activities with the game of hangman in order to make them guess the topic of the day.

Then Gaelle read a short story in order to explain what posidonia is, instead of just doing a regular lesson. I was impressed by the story especially given that she is not a native Italian speaker. However I was really in awe of how she connected with the kids. They were really engaged in the story and even more ecstatic than Napoli supporters when Maradona helped the team win a championship.

Since they knew everything about posidonia, it was time for them to express their creativity and to draw the submarine life the way they imagined it. We gave them big pieces of paper, so they could draw in groups and exchange ideas about how they pictured life in posidonia fields. I didn’t want to bother the kids while they were drawing since they were so focused.

However our project manager told me that it was actually the perfect moment to talk with them. He added that I could give them advice about what and how to draw. I must digress here. I’m the kind of guy that draws a cat with all the four paws in line but with the head facing you.

Needless to say I didn’t try to follow this piece of advice. Instead I asked them what animals they were drawing, but the truth is I felt comfortable trying to talk about soccer with the kids wearing a Napoli jersey or shirt.

Stories and drawings were nice, but it was time for the kids to do a bit more physical activity. Hence they played the musical chairs game. As there were around 25 children we used the sheets on which they drew as chairs. The drawings were on one side, and an anchor was on the other. The purpose of this game was to explain to the children that anchors damage the posidonia and destroy the habitat of many forms of life, reducing biodiversity.

After each turn one sheet was turned around, the anchor symbolizing the fact that the kids couldn’t stay on it, as if they were fishes looking for a new place to live.

The song that we chose was “Under the Sea” off The Little Mermaid OST (a logical choice given the topic). My MP3 player is teemed with extremely ignorant rap, so my biggest fear during the game was to inadvertently play one of the songs that I actually usually listen to. Because let’s be clear here: I don’t listen to The Little Mermaid OST. Ever.

We kept playing the song for a few more minutes after the end of the game so kids could keep dancing, which they were glad to do.

← My Name is Posidonia
The art of storytelling →

In a World of its Own 🪐 Magnificent Blennie Sp

“Sunsets are proof that no matter what happens,

Beauty is all around us. Just look a little closer