What does the sea mean to our Spanish guy? Joakin tells.

During the 8months- your point of view at the sea changed?

Yes! Very much, at first the sea was only a place where to go for holiday, because i live in the centre of the country so there’s no sea. So in the summer to enjoy nature, take a bath, drink a cold beer next to the beach i go there. Now my idea of the sea changed, i don’t see the sea anymore only as a touristic place, now the sea for me is an ecosystem full of life, a beautiful ecosystem, that has to be protected especially because of the quantity of animals living in.
The sea rough or calm- what do you prefer?

If I am in my bed: rough, obviously, but when i go to work at the sea, for doing monitoring, taking algies or something like this, personally I prefer it calm, everything calm, not only the sea. Life in general.
How did you feel collecting rubbish at the beach/the sea? You got angry about the persons who threw it?
I felt that I did a good thing for the environment, a little contribution to what I love and try to protect. But unfortunately this type of actions aren’t effective at all when they are not accompanied by environmental education. When children understand it is important to keep clean beaches, in the future we don’t have to clean so much after the people anymore.
Anger is a very strong feeling to have against someone. Maybe these persons didnt have the possibility to have appropriate education in this field. So, I only learned that there are still lots of things to do and it’s better to look forward than to be angry about the persons who don’t know how to protect these treasures like the sea.
Why do so many people like the sea? What is so special about it?
Because the long holidays are always in summer and it’s hot and people want to take a bath. Also the tranquility which it gives to some.

For you, which feelings are connected with the sea?
Feeling of tranquility. The sea transports me with his smell, his rumour to a state of endless tranquility. And especially when I am snorkeling, it seems that time stops.

What did you learn in the last months about the sea?
I’ve learned that the sea is a form of living, the sea is a way to go on with their lives for many people, for the fishermen, captains, persons who love and live with the sea, persons who work for guided visits… But the most beautiful thing hat I’ve learned is to appreciate all the underwaterworld and that it’s a very important treasure to protect. Before coming here I was not so conscient about which importance the sea has on our planet.

Do you remember which days here at the sea you liked the most? What made them special?
I had a lot of special days here that I can’t choose a single one.. For me every day at Ieranto was a day with many things to remember. But boh…to say one, for example, as a very symbolic day, I can take the day at the golf of of Naples where we liberated the turtles. It was very nice thing to do, and a good beginning of the project! After doing this there are not many things to beat that. I think (from a romantic-naturalistic point of view)…maybe liberating a tiger in India hahaha. 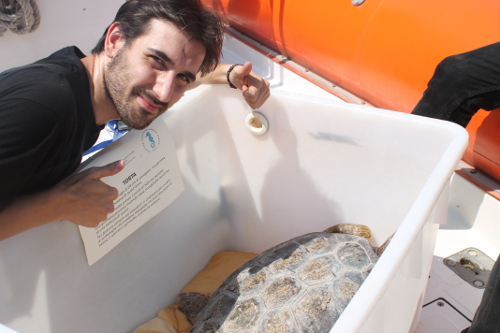