Returning to MARE and the homebrewing adventure

after the last day in Ieranto (full of jellyfish but still sunny enough to stay on the beach in only our swimsuits) and the last day in our old home, accompanied by the faithful Trilli all the way to the sunset on San Costanzo;

after the adventurous return trip to Germany via Bologna, Piemonte, Veneto to Berlin;

after winter at my parents’ place, too grey (the ever so slightly sunny days could be counted on one hand) and full of doubts, wher my only task was confronting the Big Question: “What now??” and my only certainty wanting to return the following summer to MARE – which by then seemed so far away.

Even the certainty of wanting to return, however, was disturbed by questions like “What will it be like to return as ex-volunteer? Whithout my fellow Marellini of 2014? Will the new guys be nice? And what will the project be like living in the city instead of Nerano? Without our home, not being able to go to Ieranto, Recommone, San Costanzo easily whenever I want? How do we even get to Ieranto to work? It was hard to immagine. Anyways I knew I had to return, even if only to brew beer, which my dad had done the previous year when he stayed with us, and which Mimi asked me to do again every single time he wrote me.

Arriving 8 months later on the road from Vico Equense towards Meta, seeing the peninsula which just a week ago had seemed so distant, strangely enough it feels like I never even left. And whenever I’m here, Napoli becomes my horizon, I’m so immersed in life here that it seems as if the rest of the world outside ceases to exist. 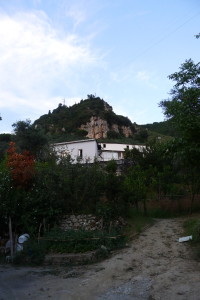 Once I arrive at the volunteers’ place, I am immediately reassured that they are all very sympathetic. The new house, even though smaller (and even though I still miss Nerano’s ex-school) is nevertheless beautiful, and is recognisably the home of Marellini: everything is a bit improvised, the same photos of turtles and underwater life are hanging on the walls and even our MARE notizie posters from last year, and most importantly it’s very welcoming, with communal dinners of international cuisine, it feels comfy.

The first days I feel a bit strange – last year the old volunteers showed us around all the places to discover in our village; I on the other hand, know nothing of the place we live now and the first time I have to return home alone I take a wrong turn and in the end have to call Mimi to find the way back to the house. Everything’s a bit different, there’s internet for everyone and even a WhatsApp group. You can easily go out in the city in the evening. By bike. 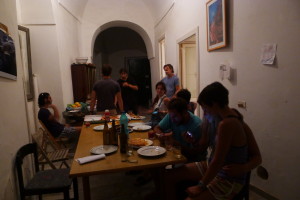 Now I’m back here for 2 weeks already and got used to the new situation quite well. I got to know the area a bit and know how to get back home. Most of all I got to know better the new volunteers and was able to share some of my experiences from last year with them. I also observed that, despite all the differences, the small problems and questions of everyday project life still remain the same, be it about learning italian, particular situations with the boats in Ieranto, or how to correctly separate the trash at home. It’s wonderful to meet again all the friends from last year, to see how much our little Silvia has grown, and how project MARE has grown, in the sense of having learned from previous experiences, and how it overcomes any new unexpected challenge. 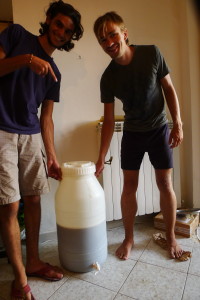 And then we did brew beer. Which was a small challenge itself, transferring what I learned from my dad in the last days before coming here with his by now well-established system of equipment into our improvised context here: for example, to store the 22l of water we sterilised the day before, we had to use every pot we could find in the house, as opposed to the convenient large buckets with lid my dad uses, and we stored them in various different places between fridge, freezer and cellar. For stirring the mixture of the various ingredients for the beer we used a broomhandle (obviously sterilised previously with boiling water). Furthermore, the malt I had ordered the week before still hadn’t arrived, and eventually I found out that the delivery company hadn’t managed to deliver it to our house, so we had to go to their deposit in Castellammare to pick it up. Without a car at our disposal, we headed out by train towards the industrial zone of Castellammare. Walking along the most polluted river in all Europe we got to know a very different kind of place than the pretty touristic towns we usually frequent during our work here.

Having returned from our walk under the scorching sun we waited for the slightly cooler hours of the evening to complete the brewing process. We needed the previously sterilised water to be very cold since it would then be mixed with the water in which we had just boiled the hops and with the malt. All together had to be less than 26 degrees in order to not kill the yeast, which we added in the end to ferment this broth and turn it into delicious beer. In the cellar underneath Nicola’s house we found a nice cool dark spot for our beer to develop without being disturbed. The volunteers are now off to their on-arrival training. After they get back, in the first days of August, it will be time to fill the beer into bottles, and we will see if the adventure of the first beer made by me, my contribution to MARE 2015, will end well. I hope so! 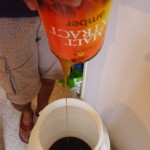 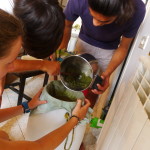 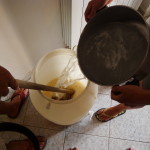 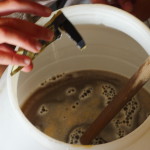 ← MARE project is haunting you!
Germans in Ieranto! →