I decided to write this article about jellyfish (even if it’s different from what we used to post), because I think that we all got once a sting from it in Ieranto at the beginning of the project, when we were young and un-experiment. It hurts a lot sometime but have you ever wondered how this creatures lives and what are their little secrets? What to do in case you got stinged? This article presents the most common spieces in the medetenarian sea.

Known in Europe as the mauve stinger

Distribution : is widely distributed in all warm and temperate waters of the world’s oceans, including the Mediterranean Sea, Red Sea and Atlantic Ocean.

The color varies worldwide, and in addition to pink or mauve, it is sometimes shades of golden yellow to tan.

The body is radially symmetrica, There is only one body cavity known as the gastrovascular cavity with only one opening that acts as a mouth and anus.  Each P. noctiluca medusa has 8 long tentacles that emerge from the umbrella margin. Being radially symmetrical it has no head and thus no centralized nervous system. The nervous system present is primitive,  also lacks a gaseous exchange, excretory and circulatory system. 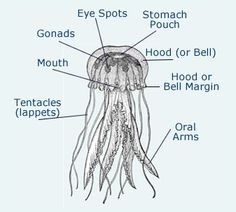 Male and female gonads vary only slightly and the main difference is the thickness of the follicle.  Eggs are laid between 12pm and 2pm in December in Mediterranean specimens as described by Metschnikoff (1886). After 3 days the egg develops in a planula at this stage movement is only done by ciliary action. After 7 days, planulae develop into ephyra which develop into young medusa after a month. 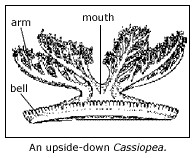 This jellyfish usually lies mouth upward on the bottom, in calm shallow water, gently pulsating its bell to create water flow over it’s arms. The bell of Cassiopea is yellow-brown with white or pale spots and streaks. The outstretched arms are also brownish with extended frilly tentacles. Adults can grow to 30 cm in diameter. They are often mistaken as sea anemones

Reproduction
Basic cnidarian reproduction involves an asexually reproducing polyp stage, alternating with a sexually reproducing medusoid stage, as described for Phyllorhiza punctata. This jellyfish is dioecious; an adult female jellyfish produces eggs and holds them until a male jellyfish releases sperm into the water. The female uses her arms and tentacles to gather sperm from the water to fertilize the eggs. 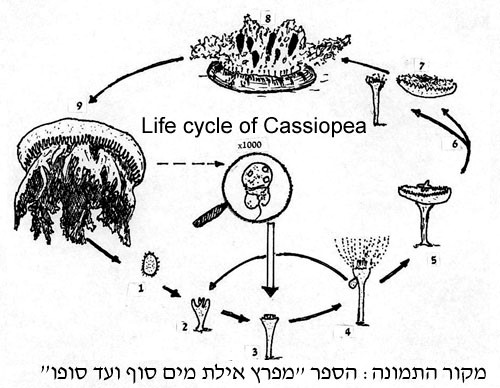 Diameter of up to 90cm and weights of up to 35 kilos – It has no trailing tentacles around the bell, but has eight, thick arms underneath. These arms end in paddles and are covered in frilly, cauliflower-like tissue where they meet the body. Close up, these frills are small, dense tentacles around hundreds of little mouths used to catch and eat their prey. The edge of the bell-shaped body is lined with blue organs called statocysts which help with balance.

Male gonads were whitish-blue in colour and contained active sperms. The sexes of mature medusae were determinable in free-swimming specimens due to sexual dimorphism in the colour of the gonads visible

through the bell. Neither embryo stages nor planulae were present in the gonads and oral lobes of medusae.

Released eggs, sank to the bottom of the water tank and developed to planulae within 2 days. 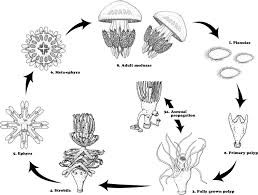 Characteristics of the sting produced by the different species of jellyfish

Pelagia noctiluca : The stinging cells have a very active venom that produces a burning sensation, inten­se pain, inflammation and redness. The sting produces hives and edema, in addition to vesicles and scabs that may appear and remain. Other symptoms, although rare, may be nausea, vomiting, muscle cramps and respiratory difficulty.

Rhizostoma pulmo : The sting may be painful, in general producing a light burning sensation and intense irritation. Even when the contact with jelly pieces or tentacles in the water does not produce important dermatologic symptoms, this species produces a mucus that con­tains stinging cells

General protocol in case of sting :

WARNING: DO NOT APPLY FRESHWATER, NO VINEGAR, NO PRESSURE BANDAGE, NO AMMONIA, NO ALCOHOL. Seek immediate medical attention if shock or breathing difficulties occur.

1) CAREFULLY WASH WITH SEAWATER, DO NOT RUB

3) USE TWEEZERS, GLOVES OR A PLASTIC CARD TO REMOVE RESIDUALS OF TENTACLES

4) APPLY ICE PACKS (wrapped in a cloth or thin towel, not directly on the skin) for 5-15 minutes – Warn victim that ice pack may be uncomfortable at first!

← To Oliver
The rain has buried our Ieranto day →