Our favourite way of transportation : KAYAK !

It has been now 4 month that we use kayak for monitoring the Ieranto bay. Honestly, I would never believed that one day in my life I would use kayak for working. It becomes so natural that sometimes I forgot how lucky we are. Walking for Ieranto, I say to myself « Such a life ! Make a path of 40 minutes walking, then jumping in a kayak to enjoy the beautiful view from the sea ». We learned how to use them, how to feel more and more confident on it every day, and today I wanted to share this feeling with you, but also learn a bit more about this mode of transport. This interest me a lot of course, but maybe you are as well !

Story of the kayak :
The first kayaks are 4 000 years old ! They were created by the Inuits, population from Arctic, to hunt seals, whales and sometimes bears. Each hunters created his own kayak to make it tailored, following a very particular way. For the length : 3 times the length of open arms, for the width of the cockpit (the part where you enter in the kayak) it was the width of the haunch plus 2 closed fists. This particular way of making tailored kayak made Europeans very confused to reproduce it, indeed every kayak were different !
The name « kayak » means « human boat » or « hunter boat ». They were made with seal’s skins stretched on a wood structure. All the kayak were coated with seal fat for a better water resistance. Even if now kayaks are really different, they already thought of the spray skirt, a sort of skirt to avoid water to go inside (they called it « tuilik »). The second function of this spray skirt was to permit the « Eskimo » technique consisting on returning the kayak upside down in vertical position, without having to exit from the kayak when the hunter capsized (the frozen water was very dangerous and they couldn’t stay too much time inside). According to the paddles, they were single or double, made of wood and sometimes consolidated with bones.

The actual kayak :
The first kayaks inspired all the actual kayaks, even if materials changed for more modern ones such as glass wool, Kevlar, carbon and plastic. The wood is still used for his lightness, but more for rivers canoe then for kayak. Now we can discern two groups of kayak : sea kayak and river kayak. The river type is more known as a sport, very popular. But it becomes more and more open for all, with very pleasant and nice emotions! This types are smaller, from 3.5m to 5m for the double. For the sea type, you can find kayak for long navigation (longer, can be until 6m for a simple), but also kayak to enjoy and make strolls, called sit-on-top.

This picture resume all the different kinds of kayak and their used :In Ieranto, we have two types of kayak : the sea kayak for making monitorring and for our guides Domenico and Francesco, and the “sit-on-top” for people who are making the visit tour with them. This last one, safer, is perfect for children or novice, even is the navigation is slower. 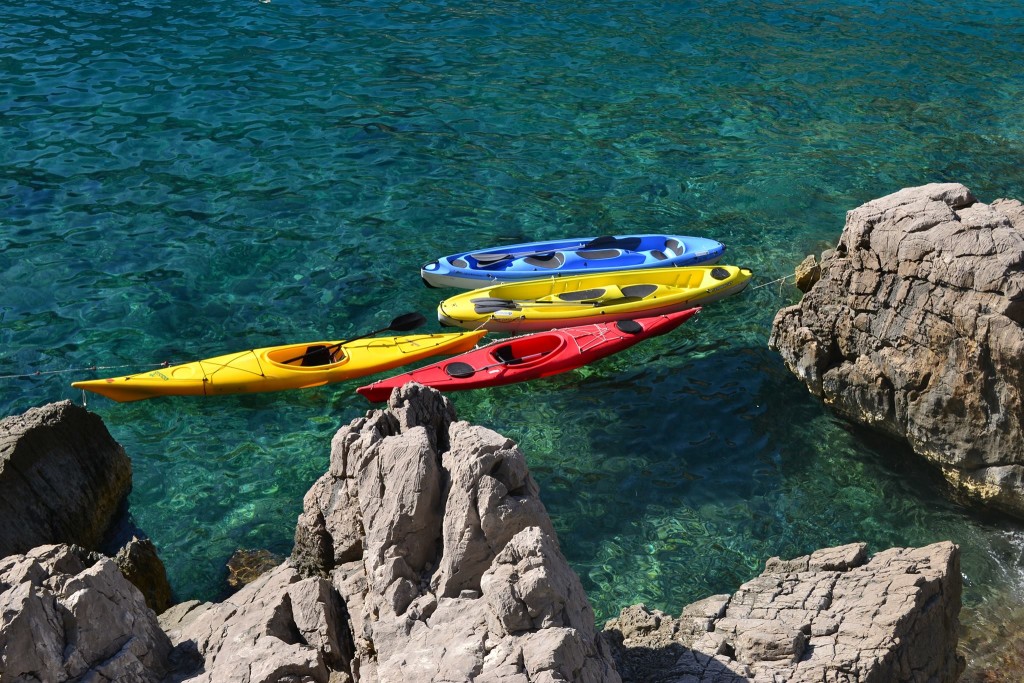 Let’s talk about feeling!
After this short view about the story of the kayak and his biodiversity, let’s talk a bit about feeling! The first time we tried kayak, it was a mix of anxiety and excitation! After a technique class with Francesco and Davide in the beach of Recommone, we jumped into the sea (without bad joke …). 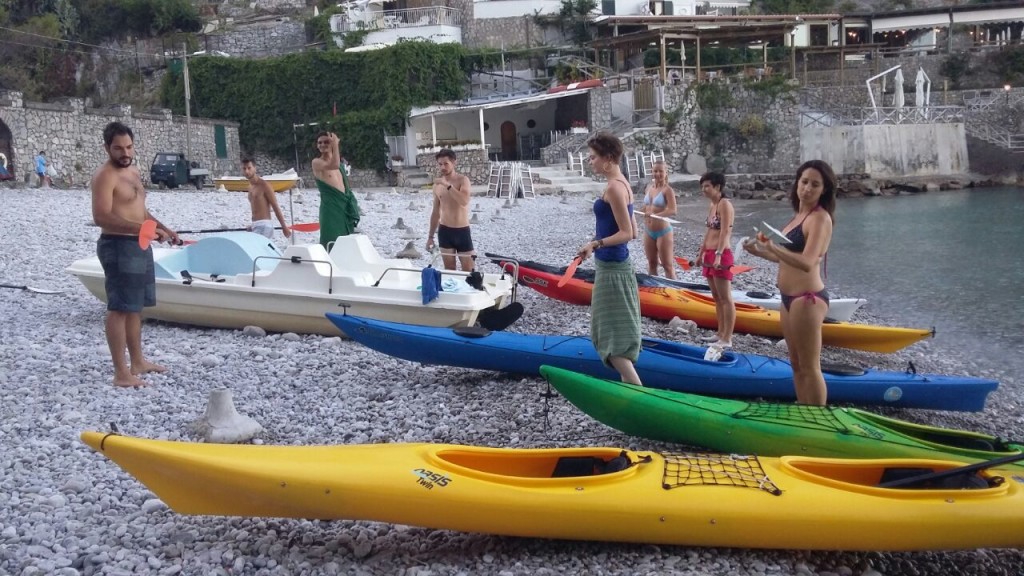 Strong feeling of freedom ! On the perfectly calm water, I could go wherever I wanted, all the caves were accessible ! From this moment, we learned how to jump in the sea and go back in the kayak in the middle of the sea (very important skill during the summer with crazy temperatures under the sun, durring the monitoring). We still have to learn the « Eskimo » technique, which is known only from Francesco so fare, and obviously we are all very jealous !

Kayak allows you to enjoy the sea/coast/nature from an other point of view, and if you begin one day, you can never stop you! During our formation in Cilento, for our free day we made a very nice tour to go to small and hidden beaches, beautiful ! Next mission : Ieranto – Capri …

To finish, some crazy kayakers :
Franz Romer cross in 1928 the Atlantic alone on his kayak …
Oskar Speck traveled from Germany to Australia from 1932 to 1939.
Paul Caffyn make the tour of Australia in February 1981.
Sergio Rodriguez, a spanish went from Barcelona and travelled since 2 years in the Mediterranean Sea. He arrived in the Peninsola on Agust, we saw him in Ieranto! He is carrying with him a message for the protection of the marine environment … (video)