This month of september, 4 of us were invited by the marine turtle research centre “stazione zoologica Anton Dohrn Napoli” to take part in the monitoring of two of the six sea turtles nests in the region of Cilento! 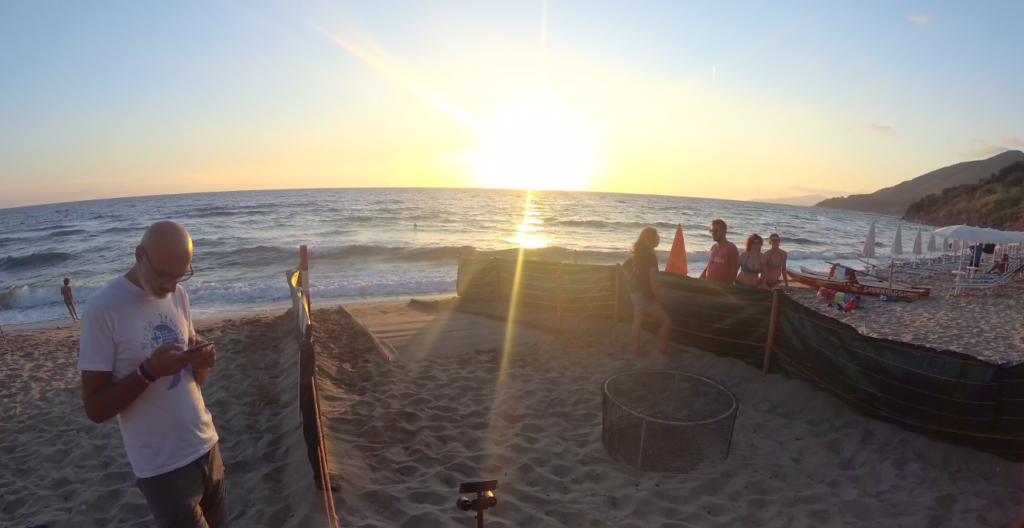 It is more or less possible to know when the babies will emerge from the sand but as we experienced in Cilento when nature is involved nothing is sure. For that reason the whole time until we closed the nests and left, the nests had to be looked after 24/7 in case there was any movement. 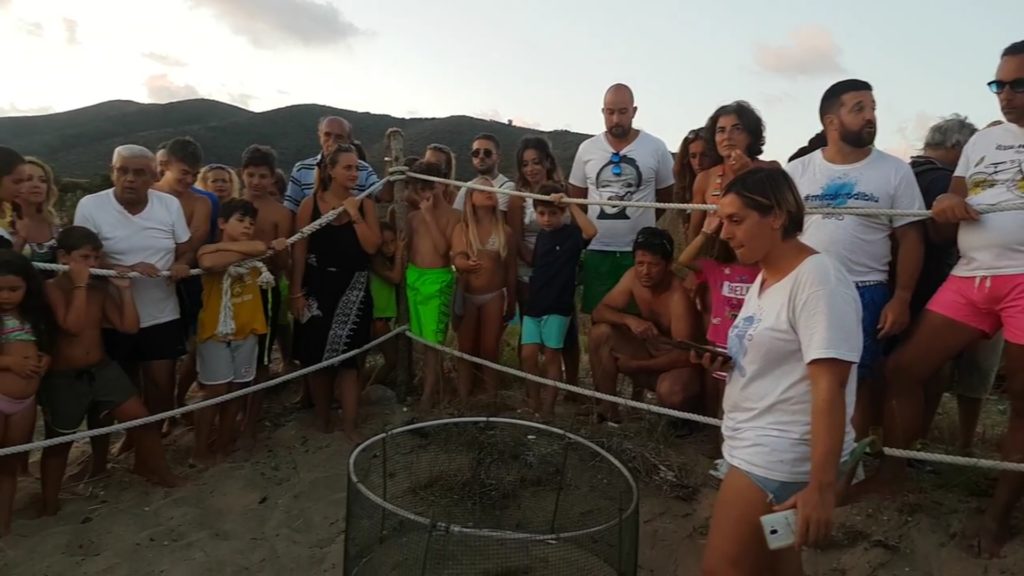 The incubation lasts approximately 60 days. Baby turtles emerge out of the sand 3 to 7 days after breaking out of their egg (using a temporary, sharp egg-tooth, called a “caruncle”). They are born with an embryonic egg sac which provides them with nutrition for those few days before they are free from the nest. The liquid contained inside the eggs will form something like a cocoon around the eggs and as soon as that cocoon breaks we know the babies will soon be coming out. At 30 to 50 centimetres under the sand the turtles work their way up together, it can take hours before you see the first turtle. As soon as one is out you can see baby turtles popping out of the sand like popcorn. 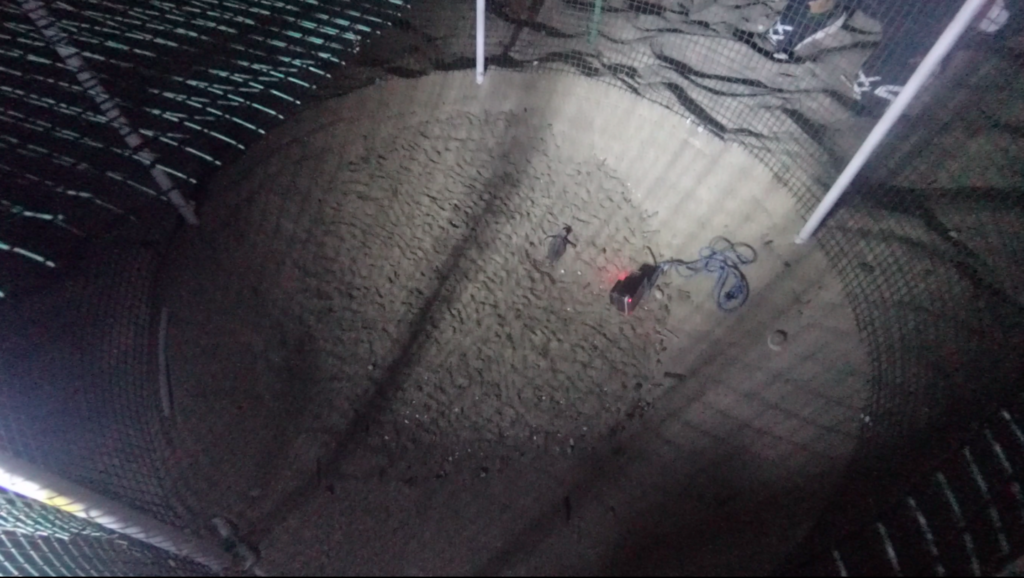 In Caprioli after 2 nights on the beach, taking care of the nest, finally in the night of the 7th september 53 turtle came out and then two more turtles broke out of the sand one the next night and another one on the 9th (after the first immersion it is still possible that some emerge in the three next nights).

In Montecorice we just finished setting up the camp around the nest when the cocoon brock (which meant that the babies would soon be there), we got our tasks explained and 102 hatchlings emerged one and a half hours later. Then we kept the babies for an hour and a half for research purposes. Ounces we weighed, measured and checked 34 of the 102 we released them all and watched them walk into the sea. 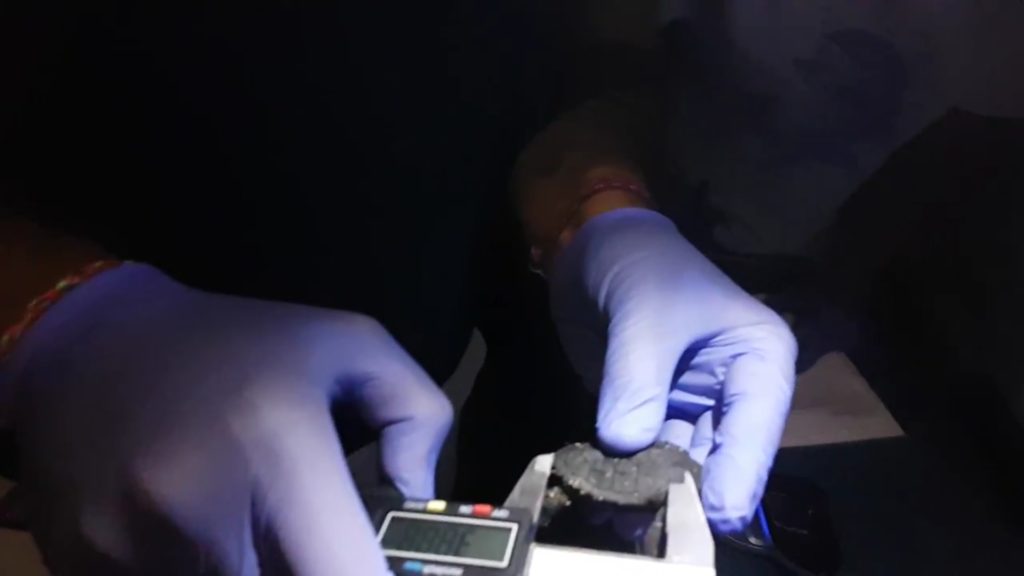 It is interesting to know that both of the nests have produced almosty females because the turtle’s gender is determined after fertilisation like most turtles, alligators and crocodiles it is the temperature of the developing offspring that determines whether it will be male or female: the warmer the more likely it is to produce females and the colder it will produce males. 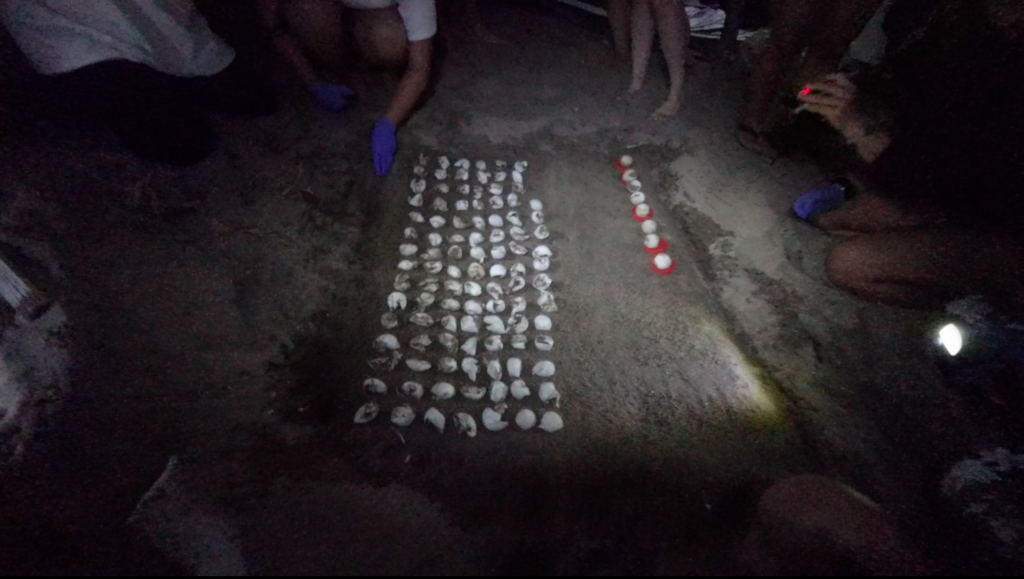 On the 11th the team of Caprioli had closed their nest and came to assist to the opening of our nest in Montecorice. The undiging of the nest is a crucial part of the investigation of turtles nests because you discover what happened under the sand for the last 70 days. For example we discovered that our nest was a very healthy nest, with the 93 percent of the layed eggs that had made it out, that some of the eggs had no visible embrione, some had a visible embrione, and that no turtles died on the way up to the surface… . After taking DNA samples of the dead eggs we closed the nest and went celebrating.

That was an amazing experience sleeping on the beach and seeing  in real life what i have seen as a kid in documentaries!