Tuesday evening, accepting the invitation from our newly made friends – association Fondalicampania, three delegates of Project M.A.R.E. went to a closing event of the photo exhibition Il Mio Mare in a (ex) library in San Giorgio a Cremano. The atmosphere in this gathering seemed intimate because apart from us and the members of the association I saw a very few other guests. As it turned out – the focus of the event was not on the photos but on the first anniversary of Fondalicampania. What a surprise that they have been together for only one year because they have achieved a lot. 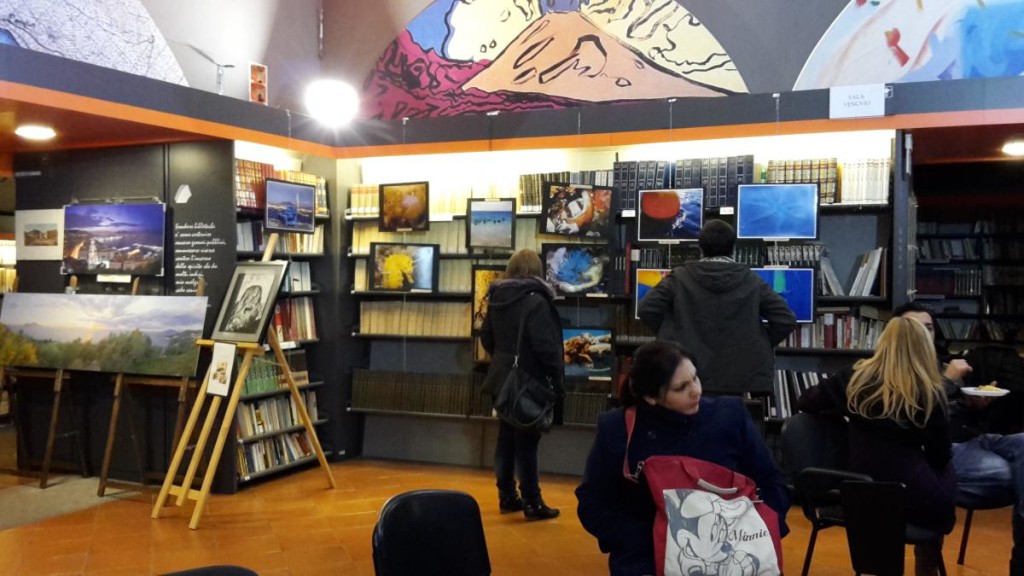 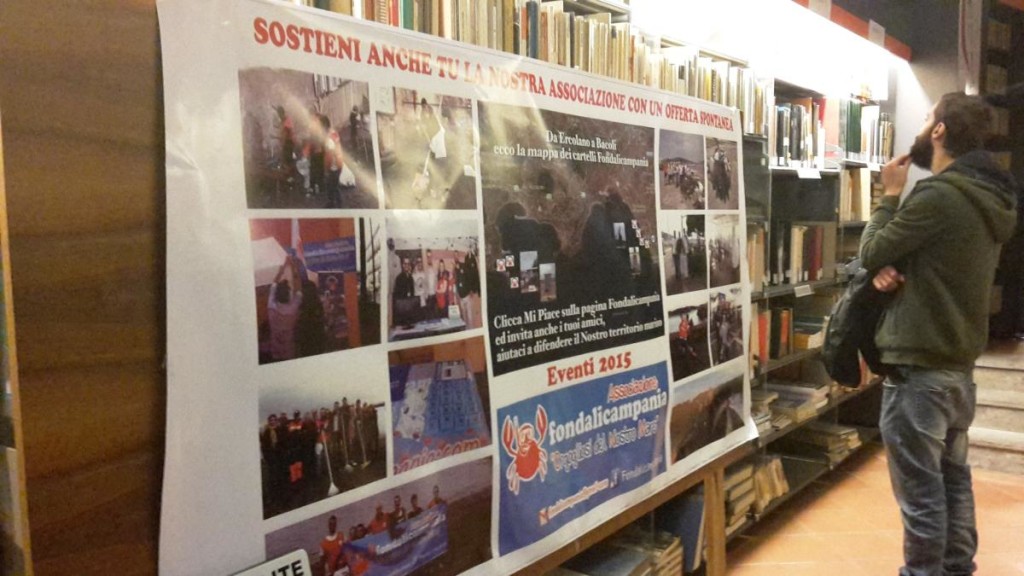 Finally our guide showed us two high resolution panoramic photos made by photo enthusiasts Around You 360 with GigaPan technology. This lets people to enjoy beautiful and very detailed views of Naples area on the screen. Sometimes one does not have the chance or willing to see it live, like the planet Mars.

The party proceeded in a calm and easy manner; thankfully without forced cheering. Just a meeting of like-minded people to celebrate the work done in the first year. A celebration is not a celebration without food and drinks. Also in this aspect the event was very pleasing. When it comes to snacks Neapolitans are not trying to reinvent the wheel – they make the same old pizzas just in bite size. So the table was covered with mini-margheritas, mini-stuffed-pizzas and some other pastries. I am by no means dissatisfied because if you put 23 morsels together you get one big pizza! We stayed long enough to taste a piece of the birthday cake. Although typically for this region it was buried with mountains of whipped cream, it was quite delicious. Still it did not beat my favorite – Torta di Nonna. 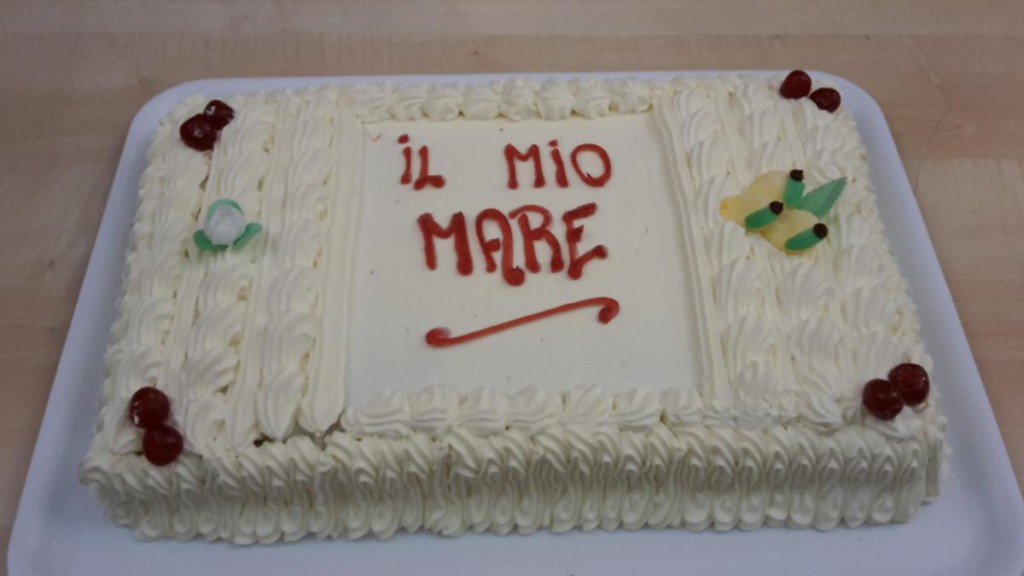 While eating and watching cool snorkelling videos we were chatting with a few other members of the association. Really all of them were super-nice. In just some 2 hours Marion got at least 3 phone numbers. Yes, she is very charming!

Afterwards we talked with Davide again about how nice and important it is for two neighbouring and sea loving projects like Fondalicampania and M.A.R.E. to meet together because currently there is a lack of awareness about and communication between them. Together we can make a bigger impact and support each other by collaborating, exchanging ideas and making a common communication and publicity platform. We definitely share this view, and therefore, we already started to make plans for our next meeting. Us, Marellini ’15, are going away soon but Project M.A.R.E. 2016 will definitely have a chance to work together with these newly made friends.

In the end of the event everyone were welcomed in the House of Massimo Troisi where his brother showed us around and told a lot of stories about the actor. I haven’t seen any films with Troisi, and therefore, I wasn’t very interested but he looked like a good-hearted guy. We will watch The Postman soon and maybe after that we will want to return. 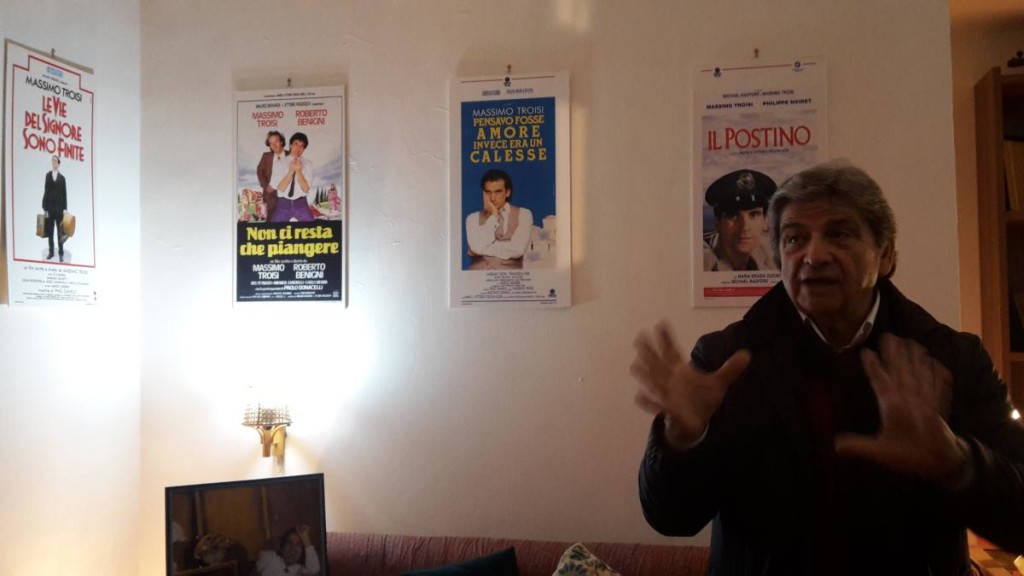 After adding the film to our bucket lists we said goodbye, and our Neapolitan friend Marco kindly took us back to Meta. On the way we stopped in a cafe Il Cratere in Ercolano for a drink. Quite cosy and hipstery place with a beautiful view over the the towns on the shore. Next time we will visit a nearby bar with the loveliest ever – “andris”.

Thank you, Fondalicampania, for the nice evening! We wish you to realize the ideas you have and make many more new ones in your second year of action!

← Excursion to CASEIFICIO VALESTRA di Vittorio e Tullio Valestra
After long abstinence of the bay: One day all together in Ieranto →