A sad day in the middle of summer

Thursday 25th of August – this day will be remembered in future years for the fire that raged in our holy Ieranto bay, on Mount San Costanzo, through the pine forest, on the ridge to Punta Campanella and all the way down to within a few meters of the houses of Nerano.

A day to forget – here is the report of the day:

8.30am a phone call from Antonella De Angelis – FAI Baia di Ieranto “the path to Ieranto is blocked because of a fire that is burning the trees and Mediterranean vegetation above, with stones and bits of burning wood rolling down onto the path. It’s very dangerous, we had to cancel today’s activities”.

9.30pm in the village of Nerano there’s a large crowd of emergency forces, firefighters, forest rangers, police, traffic officers, local people and tourists – all of us just helpless spectators of the fireshow burning a few hundred meters away from us on the eastern ridge of Mount San Costanzo, close to the olive groves and houses of the town. I find out that the fire has been going on since midnight, and not only on San Costanzo: the mountain above Crapolla is burning too. Our volunteers were already in Ieranto and have been rescued by our operators with the rubber boat. 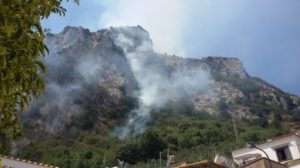 10.00pm Nobody can intervene because working on the mountain below the fires is very dangerous, so the emergency forces are waiting for a helicopter from Pontecagnano (Salerno) that has to be sent by an officer from Campania Region who has to come from Napoli in person to certify the existence of the fire with his own eyes: a typical Italian process! Meanwhile the fire rages on and the sense of utter powerlessness is invading everybody’s mind, fomenting chit-chat and gossip, false info, discontent and distrust of institutions. 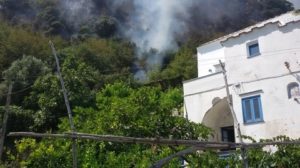 11.00am the helicopter arrives but I leave – the sense of discouragement is too much: so many years of working for nature conservation, involving people, building volunteer teams, trying to spread awareness about the importance of nature and fighting against those who still want to exploit it. Events like this one drain your energy and motivation. I decide to go to the office passing through Termini to have a look at the mountain. A strange inexplicable force makes me turn towards the mountain and drive up with the green van to the pine forest, where I feel totally alone without any fire fighters at work, but with a lot of fire all around. Just Black trees, burning woods, smoke everywhere.

11.30pm I finally reach the church where I can see the extent of the disaster:  half of the forest has gone up in smoke, there is fire in the east near Nerano, fire in the south in the bay near shepherds’ cave, fire in the west burning its way to Punta Campanella. I walk fast between the burning trees, to collect more information about what’s happening. In the meanwhile via phone I ask for more info from different points of view but the smoke is too strong forcing me to retreat. The west wind is starting to increase in strength and might soon make everything even worse. 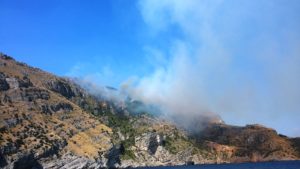 12.00am on the way back to the office I receive a phone call: “Ieranto bay is full of boats”. We couldn’t work today because it was impossible to reach Ieranto and all the illegal boats are now in.

After that there is a continuous stream of news about fires expanding and boats invading the bay. The only thing we can do is to ask the coastguard for help. And the day ends with a picture of Ieranto shown below: the bay full of smoke coming down from the mountain, 8 boats anchored, and the coastguard boat asking for documents and handing out fines. Let’s hope that tomorrow everything will be better!

Ciao tutti!! Now you can see all of our Project M

Ciao tutti!! Here we introduce you with part of t